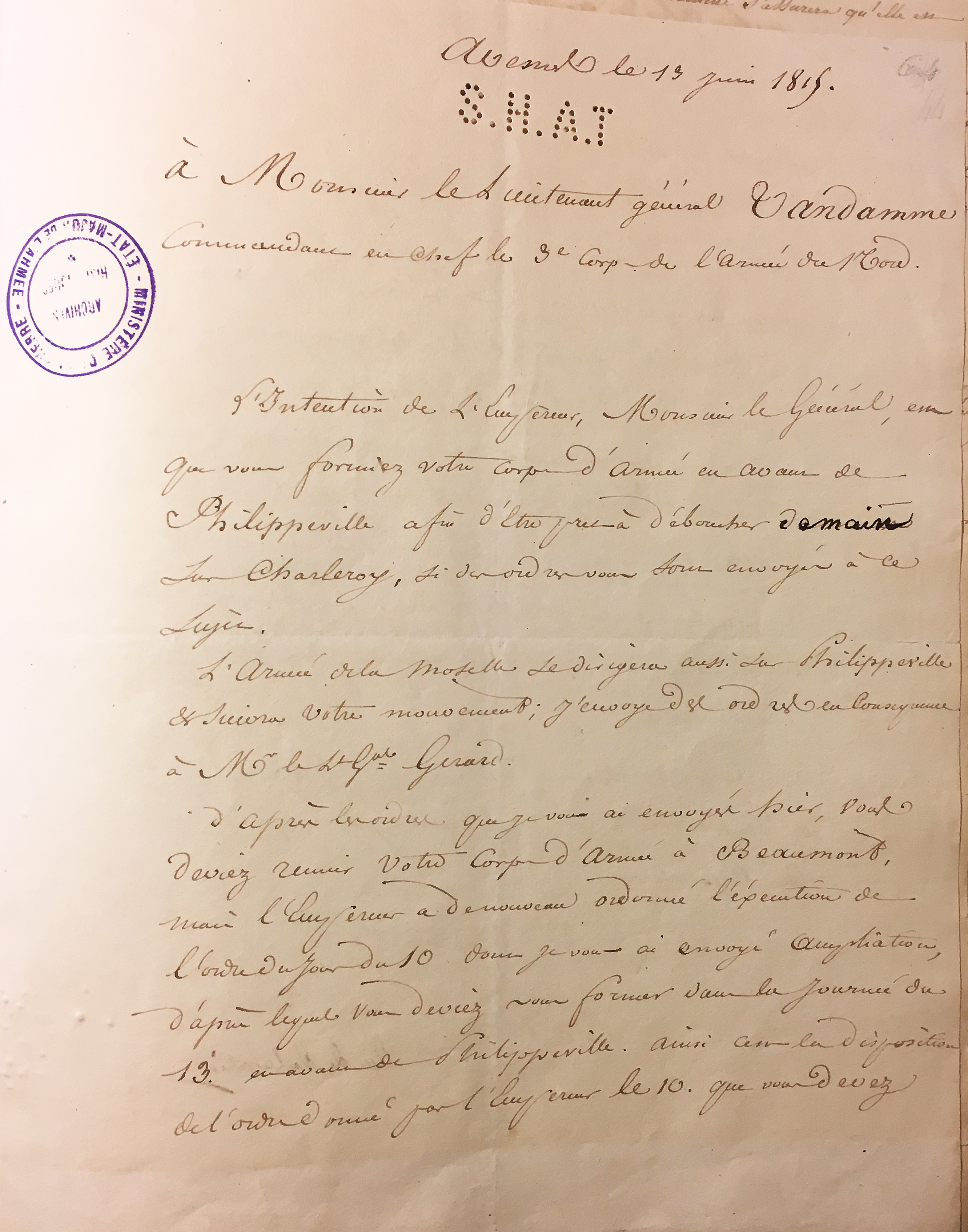 Any doubt of Napoleon’s intentions for the upcoming advance were eliminated in the early morning hours after Napoleon arrived in Avesnes.  The first order Soult registered on June 13 was to Vandamme ordering him back to Philippeville per the Ordre du Jour for the Position of the Army on the 13th.  Charleroi was the target:

Avesnes June 13, 1815
To Lieutenant General Vandamme
Commander in Chief of the 3rd Corps of the Armée du Nord.
The Emperor’s plan, General, is that you form your Army Corps in front of Philippeville in order to be ready to push ahead tomorrow towards Charleroy, if orders are sent to you
on this subject.
The Armée de la Moselle will also direct itself to Philippeville & will follow your movement; I am sending orders to this effect to Lieutenant General Gérard.
According to the orders that I sent to you yesterday, you were to gather your Army Corps in Beaumont, but the Emperor has again ordered the execution of the ordre du jour from the 10th of which I sent you the copy, according to which you were to gather your troops during the day of the 13th in front of Philippeville. It is thus the dispositions of the order given by the Emperor on the 10th that you must follow.
If, however, once my letter has reached you, your troops should be found between Philippeville and Beaumont you will leave them there and you will position them so as to be able to debouch to Charleroy, in taking your line of operations to Philippeville.
Give orders to bake a lot of bread in Philippeville and for the authorizing officer to have many provisions brought.
Instruct me immediately of the location of your troops and of the arrangements that you will make for the execution of this order.
You will take care, General, to send an officer to General Gérard to inform him of these arrangements. 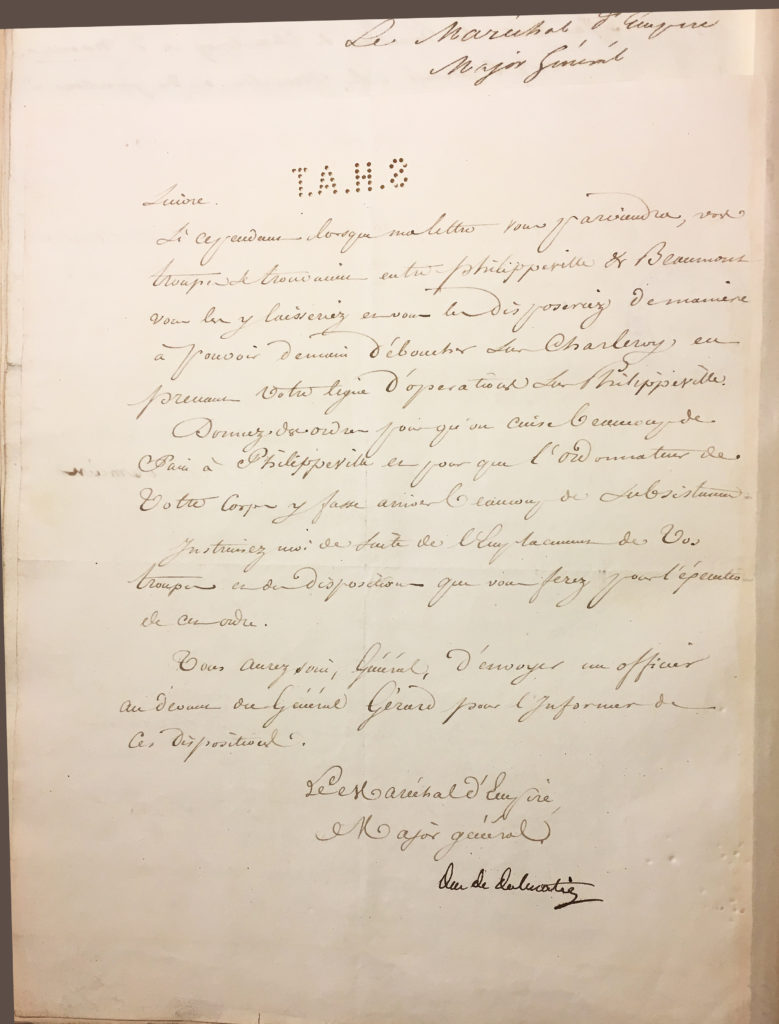 Notice that the Emperor’s new orders change those previously given, instead of going to Chimay and Beaumont, he will go to Philippeville to settle in the 2nd line behind the 3rd Corps, which will probably focus an attack on the Sambre.

Lobau’s orders were also countermanded, as found in #313 of Moouvement des Troupes:

He will move towards Beaumont, and will report on the position and the arrangements made for the execution of the Emperor’s orders.

Vandamme did not receive the countermanded order in time, and 3rd Corps marched to Beaumont, as told by an unknown officer:

Général Vandamme, who knew the Emperor had arrived at Avesnes, ordered a review of the entire Army Corps on the 13th at 5 o’clock in the morning, in view of Chimay on the Beaumont route. Even the armaments were to be present for inspection. General Vandamme’s foresight in this matter meant he was able to move his entire Army Corps to Beaumont on the 13th. The officer sent by the Emperor to bring Vandamme those orders to march had gotten lost. Though Vandamme did not receive them until daybreak, the officer’s detainment did not cause him further delay.
General Nempde-Dupoyet, commander of the Army Corps’ Engineers, was immediately sent with the sappers to clear the Beaumont road and repair the breaks. The march was somewhat slowed by these operations, but they did not prevent the Army Corps from arriving at Beaumont that nightfall. The divisions bivouacked before this city and to the rear of Thirimont.

As Vandamme had moved to the center, Napoleon did not want him moving again before the advance, and thus ordered Soult to adjust the army, as found in this letter from a private collection:

Cousin, since General Vandamme has arrived in Beaumont, I do not think he should be made to return to Philippeville, which would tire his troops. I prefer that this general camp on the first line 1 1/2 leagues from Beaumont. I will conduct the inspection tomorrow. The 6th Corps will then be placed 1/4 league behind. In this case the Armée de la Moselle will gather tomorrow in Philippeville with the detachment of cuirassiers that is coming from Alsace. Make this change to the general order. 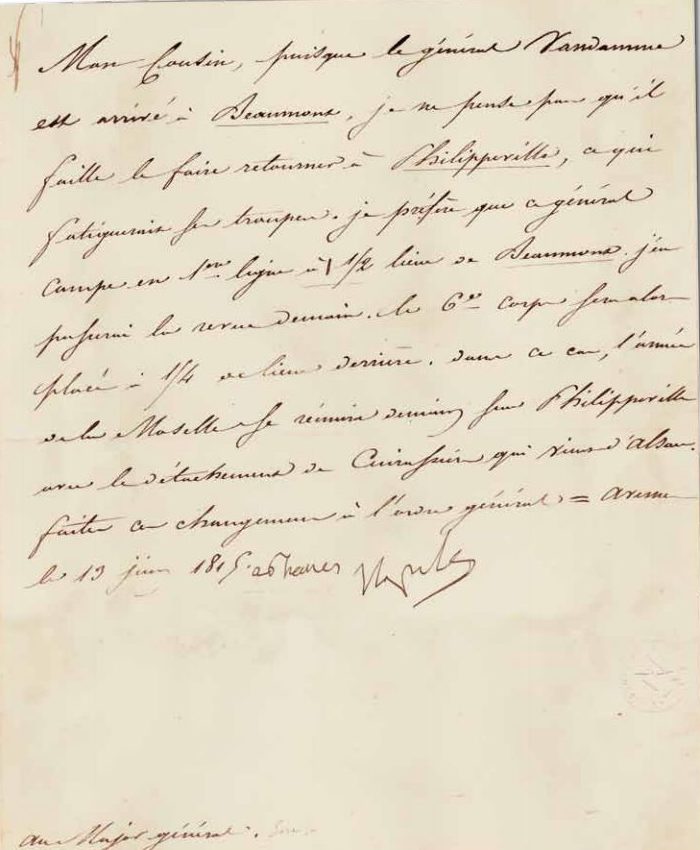