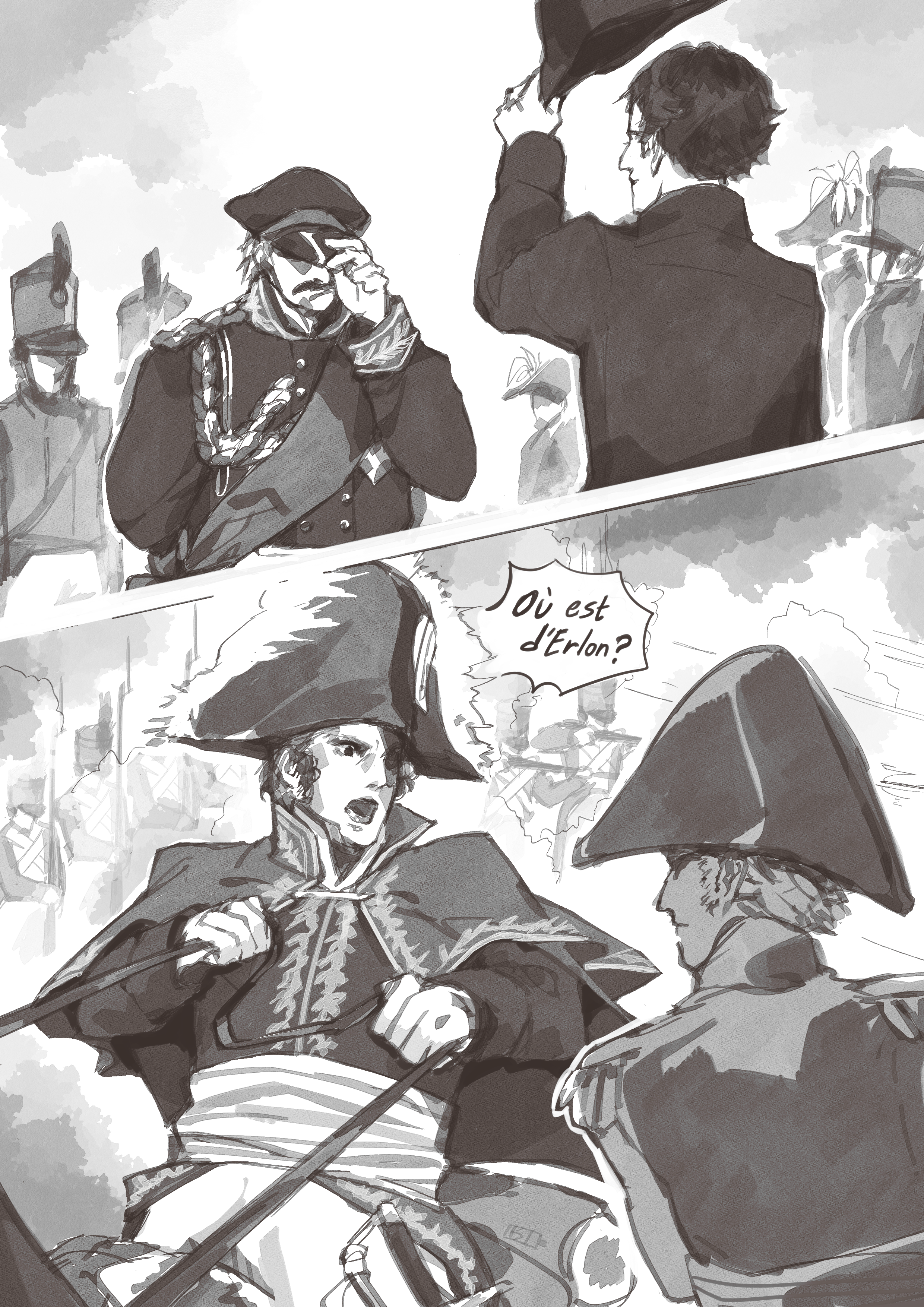 Ney did not move on Quatre Bras with much urgency. However, the need for urgency is only obvious in retrospect.  Napoleon’s orders were delivered in the late morning, and the action Ney was to prepare for was predominantly in the evening.  When Napoleon issued his orders, there was no expectation of a battle, let alone two, on June 16.

While there is room to criticize Ney, it must be remembered that he inherited a left wing that had, by no fault of his own, been left spread across 24 kilometers as the crow flies. Had 1st Corps crossed the Sambre on the 15th, it’s a fair assumption that Ney would have been far more confident to undertake aggressive actions, both late in the day on the 15th and early on the 16th, as he would have had more strength to deal with the various  concerns he had about being positioned so far in front on the French army.

At 1pm, Wellington met Blücher near Bussy at the Ligny battlefield.  Napoleon’s plans, both before the advance, and as he improvised on June 16, were predicated on separating the Allied armies and preventing their cooperation.  Yet for one hour on June 16, the Allied high command met in person and discussed operations.  The Allies were coordinated.  They would remain coordinated.  For a litany of reasons, Napoleon had failed spectacularly.

Ney and Wellington fought to a stalemate, and late in the day Ney learned of d’Erlon’s march to Ligny. Deprived of 1st Corps, he was not able to match Wellington’s growing forces. He withdrew to Frasnes around 8:30 pm.  D’Erlon’s 1st Corps, minus its cavalry and the division
of Durutte left at the left of the French line at Ligny, arrived at 9:00 pm, having not contributed to either battle fought that day.

While Ney waited for d’Erlon, as Napoleon waited for Ney, Wellington and Blücher were meeting.  That was the failure realized.  Had the Prussians forwarded their intelligence of June 14, the French may have been decisively defeated on June 16.

It is understandable that Napoleon was not aware of the early Prussian concentration.  It is “inexplicable”, to quote Napoleon, that he was unaware of the dispositions of his own army.  Yet, Napoleon’s orders on June 16 demonstrated his ignorance of his left.  He believed that Ney had 1st and 2nd Corps concentrated and could brush aside resistance.  His orders for Ney to send a force behind the Prussian lines was never realistic: d’Erlon was too far south.

In Gourgaud’s diaries, printed after his death and never meant to be published, Napoleon comments on d’Erlon and the events of the day:

The movement of d’Erlon did me much harm. Those around me thought it was an advance of the enemy. D’Erlon was a good staff officer. He could maintain order; but that was all. He ought on the 15th to have sent me word that he was at Marchiennes.

“Ney went crazy: I entrust to him 40,000 men, and he does not unite them; there are eight hours without doing anything; he does not crush the English, nor give the final blow to the Prussians! And he added such a fault to disobey my orders: he stops the Count d’Erlon marching on Saint-Amand and prevents me from  destroying the Prussian army! If I do not owe him so much for his past service, I would shoot him on the spot.” And with an indescribable accent which betrayed the pain, he repeated several times: “He has lost France.”

This scene had no other witness than Marshal Soult who immediately told General Bailly de Monthion, Chief of the General Staff. The latter, in turn, told my uncle who served under him for several years and who enjoyed his confidence. This transpired by the way, the same day, in the Army Headquarters.

Should this sourcing be trusted?  As we shall see, the veracity of a quote is often directly related to the desire of an audience.

In Stoffel’s notes, there is the following: 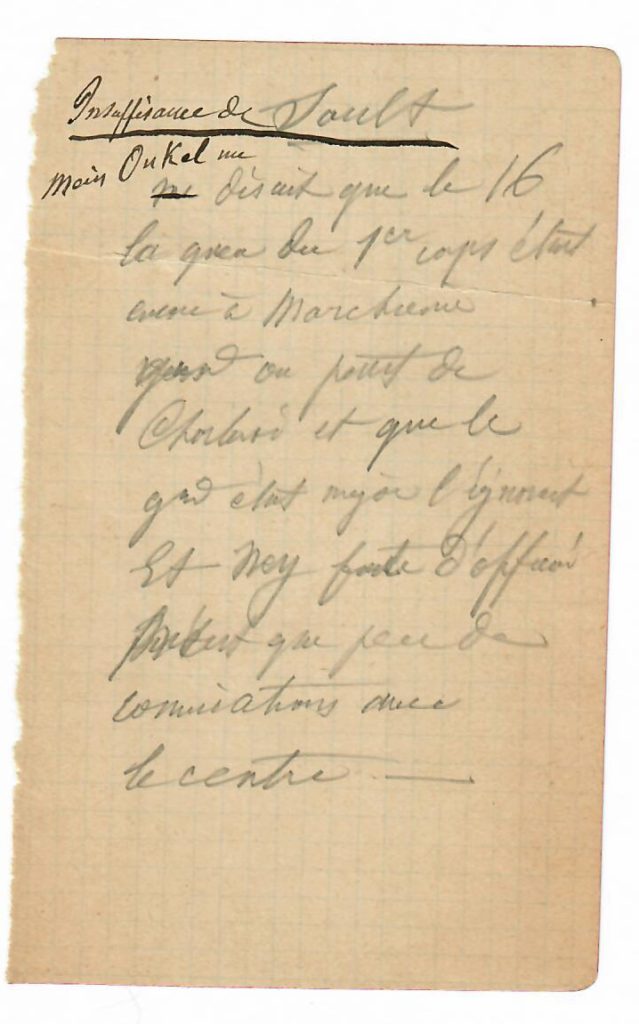 My uncle used to tell me that on the 16th the 1st corps was still at Marchienne-au-Pont of Charleroi and that the army headquarters was unaware of this and Ney lacking officers had only little communication with the center.

Hulot summarized the importance of June 16:

As far as the military operations are concerned, we lost everything on the day of the 16th; since the first serious hostilities did not result in a huge stroke on any of the enemy’s armies, I believe there were very little chances for a final success.

Below is a detailed map of Quatre-Bras in the morning, from Stoffel’s unpublished manuscript: 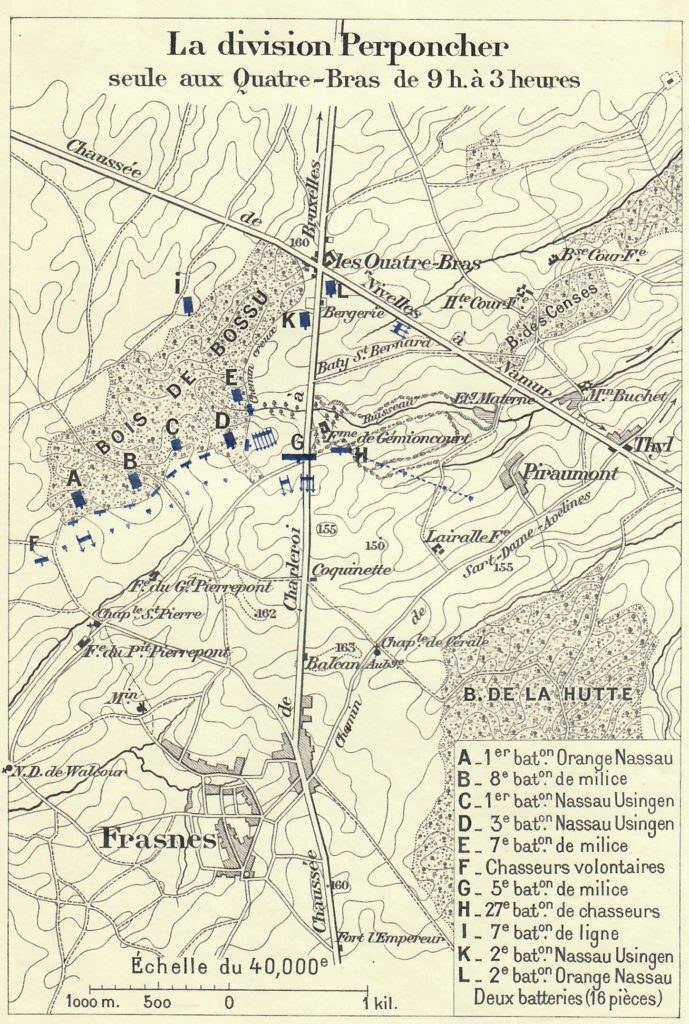