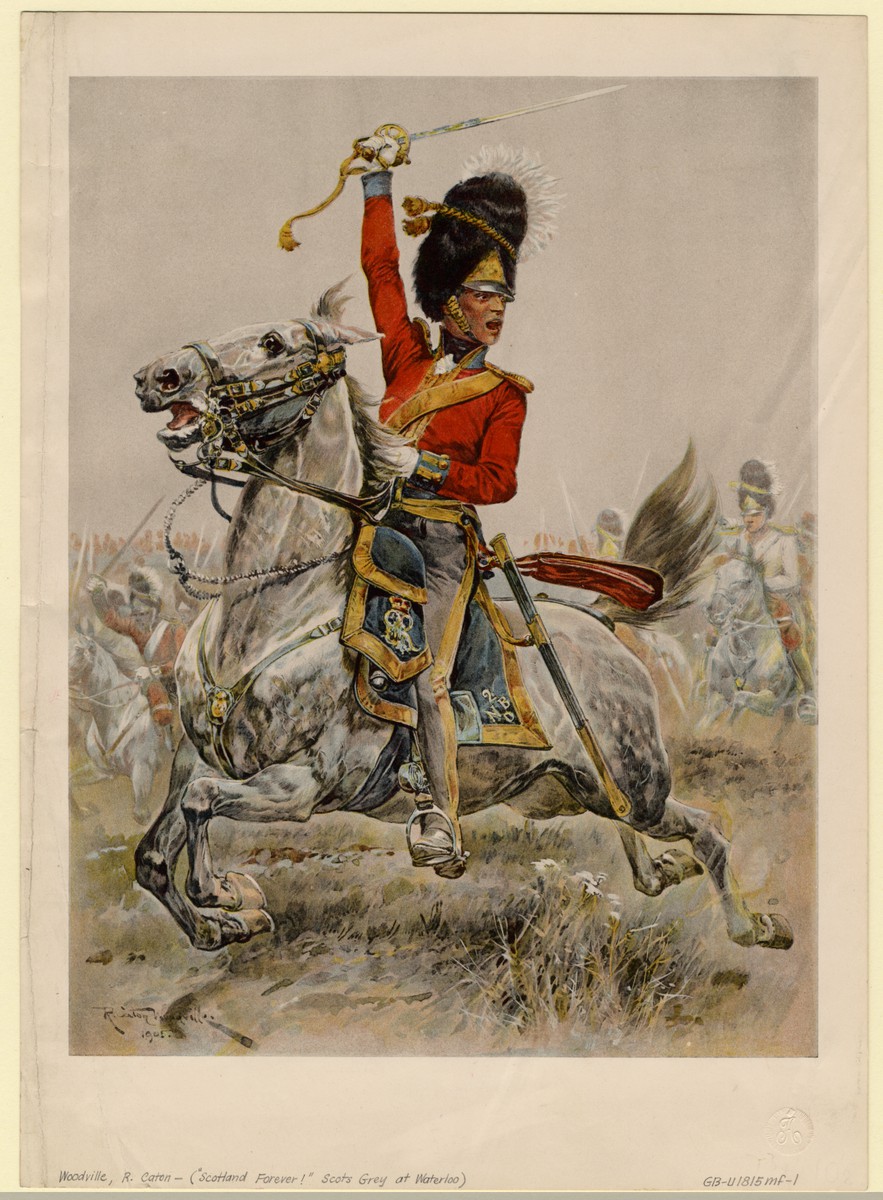 During the night of June 17, and into the morning of June 18, Houssaye tells us,

Soult was anxious.  He apprehended the arrival of the Prussians upon the battlefield no more than did the Emperor – he judged that the French were rid of them for many days.  But he regretted that Marshal Grouchy with 33,000 men had been detached to pursue Blücher, when a single corps of infantry and a few thousand cavalry would have sufficed.  Half of the roops of the right wing, he thought, would be far more useful in the great battle which was to be fought with the English Army, so firm, so stubborn, and so formidable.   As Lefebvre’s chief of staff, Soult had carried by assault, July 9, 1794, this same plateau of Mont Saint-Jean, and had thrown the Imperialists into Brussels.  But he knew that the English infantry was far more tenacious than the Austrian; so on the previous evening, he had advanced the Emperor to recall a part of the troops put under the orders of Grouchy.  During the morning he had reiterated his advice.  Napoleon, impatient, brutally replied: “Because you have been beaten by Wellington you regard him as a great general.  I tell you that Wellington is a bad general, that the English are bad troops, and that this will be a very small affair.”

Soult was uneasy.  He no more dreaded the arrival of the Prussians on the field of battle tha ndid the Emperor; he considered they were out of the game for several days.  But he regretted that 33,000 men had been detached with Marshal Grouchy, when a single corps of infantry and a few thousand horse would have sufficed for the pursuit of Blücher.  Half of these troops of the right wing, he thought, would have been invaluable in the great battle that was about to be fought with the English army, which was so firm, so resolute, so formidable.  In his capacity as head of Lefebvre’s staff, on the 9th of July 1794, Soult had taken this same plateau of Mont-Saint-Jean by storm, and had driven the Imperials from the forest of Soignes to Brussels.  But he knew that the English infantry was incomparably more determined in their resistance, than the Austrian infantry.  For this reason, during the preceding evening, he had already urged the Emperor to recall part of the troops placed under Grouchy’s orders.  That morning he repeated his warning.  Napoleon, exasperated, replied to him roughly: “Because you have been beaten by Wellington, you consider him a great general.  And now I tell you that Wellington is a bad general, that the English are bad troops, and that this affair is nothing more serious than eating one’s breakfast.”

The quote in French is:

There are many variants in English – but Mann’s is the one most often quoted.  His has a great visualization and flair, and so demeaning to an enemy that would soon prove to be as tenacious as Napoleon had ever faced.

This is one of the most utilized quotes for the Campaign, and for Napoleon in general.  It perfectly sets up the dramatic tragedy of the villain, dismissive of his foe, who is ultimately destroyed.  For many, it frames the argument for Napoleon the man, one who obviously suffered from any number of psychiatric and personality disorders.

This quote is almost always used without citation.  Facts need no evidence!

Houssaye probably found this quote in the 1890s.  His Waterloo book was published in 1899, though I have not seen the first edition.  Baudus was an aide-de-camp of Soult, and Houssaye described him as “very royalist.”  While Baudus was put on half-pay after Waterloo, he is reinstated by 1816, and in 1821 was appointed a Chevalier de l’Ordre royal et militaire de Saint-Louis.  Baudus wasn’t getting the Bourmont treatment, but he was certainly accepted back into the fold.

Baudus would publish his own book in 1841.  The scene Baudus described is thus a valuable addition to this event:

The Major General, persisting in his view that Napoleon had been wrong to give two whole corps of infantry to Marshal Grouchy, thought it his duty to open the notice of recall on the spot most largely for the next day’s business; but his comments about it were no more heard in the evening than they had been in the morning.

Eh, boring?  But indeed, every reference to Wellington was reviewed, as well as all references to Grouchy, and this was the closest that could be found:

That Baudus did not use this quote from his notes is not proof that Napoleon did not utter the words, but it certainly gives pause.

Chateaubriand published his memoirs, Mémoires d’outre-tombe, Volume 4,  in 1849, we find:

Many falsehoods and a few rather curious truths have been credited to this catastrophe. The phrase: ‘The Guard dies but does not surrender’ is an invention which no one dares to defend any more. It appears certain that at the commencement of the action, Soult made some strategic observations to the Emperor: ‘Because Wellington has beaten you,’ Napoleon replied dryly, ‘you always think him a great general.’ At the end of the battle, Monsieur de Turenne urged Bonaparte to withdraw, to avoid falling into the hands of the enemy: Bonaparte, emerging from thought as if from a dream, was enraged at first; then suddenly, in the midst of his anger, he threw himself on his horse and fled.

Here, Chateaubriand acknowledges that one of the favorite quotes of the French, that defined the Glorious defeat, was fiction.  This was confirmed by the man that it was attributed to.  Chateaubriand appears to be sensitive to repeating myth, and his version of the quote skips breakfast!

At Waterloo, always with the same sentiments in regard to the one who he had called “a General of Sepoys,” the Emperor said to Soult: “Because Wellington has defeated you, you believe that he is a great general,” and on this day Wellington won a victory over him more decisive than those of Jena, Austerlitz, and Wagram!

The relevant portion in French:

Brialmont cites no reference, and it may have been Chateaubriand.  Houssaye quotes from Brialmont in the same chapter as the breakfast quote.

Based on the above, at best, one can say that Napoleon is alleged to have said this famous quote, but one would need to reveal that the source did not use it, and that a reduced form of the quote was well known.   That this quote was said has never been close to fact.

Now consider that in this study and timeline, some very controversial theses were presented.

Is it possible that the Mons plan was a ruse?  The evidence is purely circumstantial.  But it is a fact that a Mons plan existed, as did a Charleroi.  It is a fact that Napoleon intended the Charleroi plan.  It is a fact that Soult followed the Mons plan. It is very possible that Napoleon changed his mind, and there was a mix-up of order delivery.  Yet in that scenario, it is fascinating that the Allies received such good intelligence of Napoleon’s initial plan – Avesnes to Mons.  What happened on June 10 through June 12 has many holes, and there is much still to learn, but there is no doubt something happened that was atypical.

There are witnesses that claim Bourmont had crossed the border on June 14 – Clouet part of the staff, and Rilliet who wrote he saw Bourmont and staff.  Rilliet claimed to bring intelligence to Namur serving as a French officer of the King, and several Prussian witnesses saw French officers in Namur.  Gneisenau did order the concentration on June 14, and numerous historians, including Prussians, believe Bourmont may have had a role in the intelligence.  This is also just a theory, but it has far more substantiation than the Napoleon breakfast quote.

There are many possibilities during 1815 that have as much corroboration or validity as the breakfast quote… which means based on a single rumor from a single source and without corroboration.  Most of these are summarily dismissed.

But not the Breakfast quote! That has been elevated to fact not due to sound historical analysis, but simply because it is wanted to be true.  It is the best line in the script which has become the myth of Waterloo.

In the John Ford masterpiece, The Man Who Shot Liberty Valance, when a reporter learns the truth, that the hero of the story did not kill the outlaw, he states, “When the legend becomes fact, print the legend.” This attitude has dominated the history of the Waterloo campaign for over 100 years.

The conspiracy theorists’ way of constructing a historical argument demonstrates their fundamental misunderstanding of the historical method. They raise doubts about an established interpretation and construct new hypotheses based on (often  minor) inconsistencies in the historical record, while usually ignoring or dismissing the overwhelming evidence amassed by professional historians.

This is certainly often true.  But it is also true that many credentialed historians appear to ignore that overwhelming lack of evidence for many significant events.  They perpetuate established interpretations, mastered in their youth, and meet with disdain the efforts to find answers. It is far easier to nail oneself to an already mastered past.  These individuals identify themselves easily, and should be ignored.

The soldiers that fought in this campaign deserve their history, and for many their ultimate sacrifice, to be honored properly by telling this campaign as factually as possible. Repeating popular legends reduces their efforts to caricature – which may have been acceptable rhetoric during the struggle for French identity in the 19th century, but is inexcusable today.

Napoleon was decisively defeated on June 18, 1815.