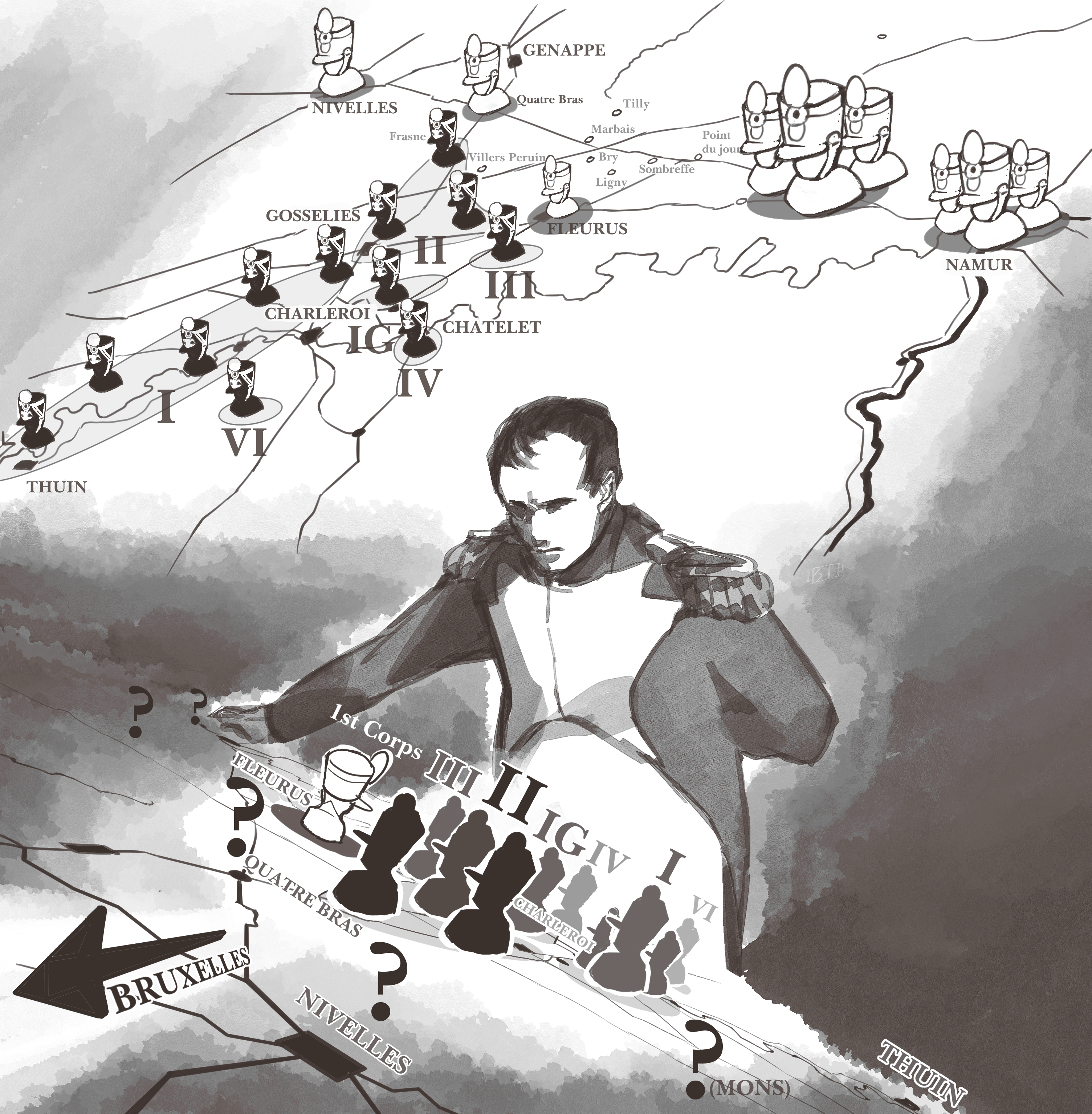 Napoleon believed he had achieved a great success on June 15.

Gourgaud, who had accompanied Napoleon to Saint Helena, would publish an account of the campaign in 1818 after departing exile.  He reported the following dispositions:

The left wing of the French army, commanded by Marshal Ney, had its headquarters at Gosselies, and its vanguard at Frasnes; General Reille’s corps was stationed between Gosselies and Frasnes, having one division (Girard’s) at Vagnies, in the direction of Fleurus; General d’Erlon’s corps was between Marchiennes and Jumet.
The center, consisting of Vandamme’s corps and Grouchy’s reserves of cavalry, lined the woods opposite of Fleurus. General Gérard’s corps, forming the right wing, had passed the Sambre, and was in front of Châtelet.
The imperial guard was echeloned, between Fleurus and a corps of cuirassiers, with the great part of artillery, on the left bank of the Sambre, behind Charleroi.

Napoleon also wrote that on the evening of the 15th, “… the 1st Corps in column between Marchiennes to Gosselies.” Both Gourgaud and Napoleon were incorrect. 1st Corps was deployed from Thuin to Jumet, spread over 20 kilometers.

That evening, the army Bulletin was sent to Paris; it was published on June 18 in the Moniteur:

Charleroi, June 15, 1815, in the evening.
On the 14th, the army was placed in the following manner:
The Imperial Headquarters at Beaumont.
The 1st Corps, commanded by General d’Erlon, was at Solre, on the Sambre.
The 2nd Corps, commanded by General Reille, was at Ham-sur-Heure.
The 3rd Corps, commanded by General Vandamme, was to the right of Beaumont.
The 4th Corps, commanded by General Gérard, arrived at Philippeville.
On the 15th, at three o’clock in the morning, General Reille attacked the enemy and marched on Marchienne-au-Pont, he had different engagements in which his cavalry charged a Prussian battalion and took 300 prisoners.
At one o’clock in the morning, the Emperor was at Jamioulx-sur-Heure.
General Domon’s Light Cavalry Division sabred two Prussian battalions and took 400 prisoners.
General Pajol entered Charleroi at midday. The Sappers and the Marines of the Guard were in the spearhead to repair the bridges; fighting as skirmishers, they were first to enter the town, Général Reille with the 1st Hussars marched on Gosselies on the Brussels road, and Général Pajol on Gilly on the Namur road.
At three o’clock in the afternoon, General Vandamme debouched with his Corps on Gilly.
Marshal Grouchy arrived with General Exelmans’ Cavalry.
The enemy occupied the left of the Fleurus location. At five o’clock in the afternoon, the Emperor ordered the attack. The position was turned and dislodged. The four Service Squadrons of the Guard, commanded by General Letort, Aide-de-Camp of the Emperor, fell on three squares: the 26th, 27th, and 28th Prussian regiments
were routed. Our squadrons sabred 400 or 500 men and took 1,500 prisoners.
During this time, General Reille crossed the Sambre at Marchienne-au-Pont, to march on Gosselies with Prince Jérôme and General Bachelu’s divisions, attacked the enemy, took 250 prisoners and continued on the Brussels road.
Thus we became masters of the entire Fleurus position.
At eight o’clock in the evening, the Emperor returned to his headquarters in Charleroi.
This day cost the enemy five pieces of cannon and 2,000 men, including 1,000 prisoners. Our loss is 10 killed men and 80 wounded, the majority of these were from the service squadrons, who charged home, and of the three squadrons of 20th Dragoons, who also charged a square with the greatest intrepidity. Our loss, light in numbers, was sensitive to the Emperor, with the serious wound received by General Letort, his Aide-de-Camp, while charging at the head of the Service Squadrons. This officer has the greatest distinction. He was struck by a ball in the stomach, and the surgeon fears that his wound is mortal.
We found some magazines in Charleroi. The Belgian’s joy can not be described. There are villages that, at the sight of their liberators, began dancing, and everywhere there is spirit from the heart.
In the report to the General Staff, we will include the names of the officers and soldiers who distinguished themselves.
The Emperor gave the command of the left to the Prince de la Moskowa, who had, in the evening, his headquarters at Quatre Bras on the Brussels road.
The Duke of Treviso, to whom the Emperor had given the command of the Young Guard, remained in Beaumont, suffering from a sciatica that forced him to bed.
The 4th Corps, commanded by General Gérard, arrives this evening at Chàtelet. General Gérard reported that Lieutenant General Bourmont, Colonel Clouet, and Major Villoutreys went over to the enemy. A Lieutenant of the 11th Chasseurs also passed to the enemy. The Major General ordered that these deserters be judged
immediately in accordance with the laws.
Nothing can portray the good spirit and fervor of the army. We regard this as a happy event, the desertion of this small number of traitors, who reveal themselves this way.

The Bulletin was ripe with the typical exaggerations that favored the French.

Napoleon thought the Allies were caught by complete surprise.  Looking at the map below, nothing can prevent the French from seizing the Nivelles-Namur road.  The Prussian 1st Corps around Fleurus would be compelled to retreat to the east.  Wellington would concentrate, but Napoleon did not expect him to make a stand alone.  Napoleon remained concerned about Wellington’s position, and d’Erlon would be ordered to keep a watch on the west towards Mons.  Mons’ role in the Waterloo campaign was far more significant to both Wellington and Napoleon than is realized.

Napoleon was satisfied, and far too relaxed. 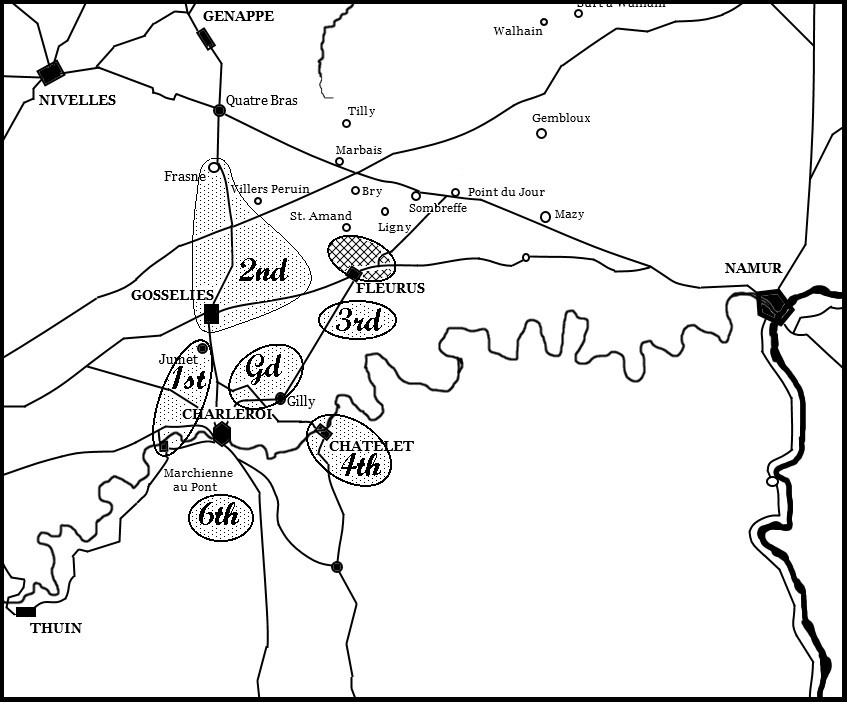 While Napoleon was dreaming of Brussels, the Allies were marching. The Prussians had a half-day head start due to their concentration orders of late June 14.  Wellington was rushing troops to the front.  He was concerned about an advance through Mons, and initially weighted his forces in that direction.  Had the Prussians not been gathering an Army near Namur, then the void between Nivelles and Namur would have been untenable.

Napoleon was completely ignorant of this gathering Allied threat.  Just as bad, he was ignorant of d’Erlon’s 1st Corps disposition.  Napoleon had given Ney more than 40,000 men, but as Ney’s 11pm report demonstrated, Ney did not have control of even 20,000 men.

Yet, the Prussians had not notified Wellington of their early concentration, and just as the map below shows Napoleon’s ignorance, it should also be clear that the Prussians were gathering an army within the cross-hairs of Napoleon and a formidable army. 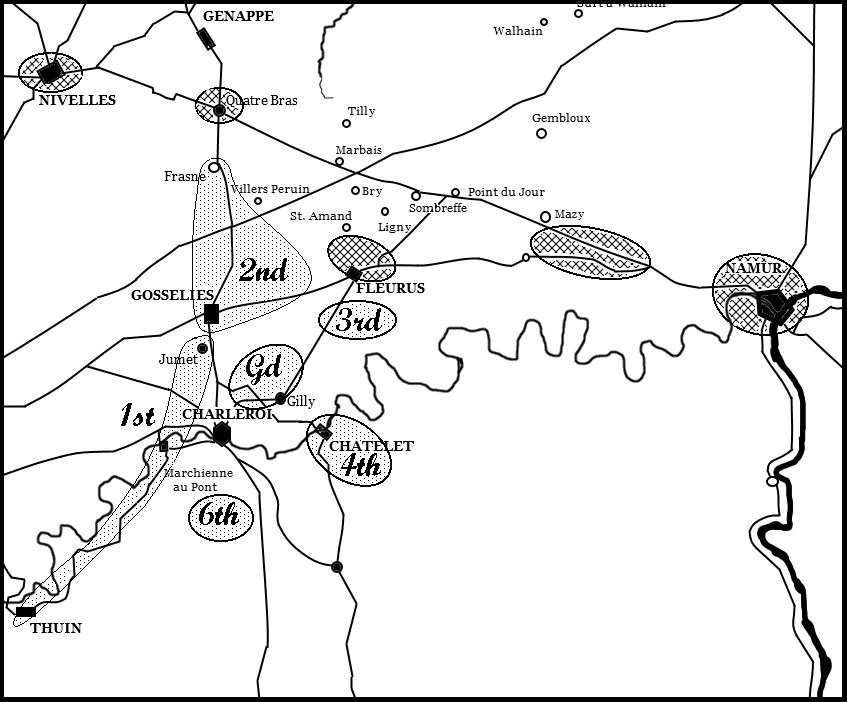 A detail of the French dispositions is seen in a map Stoffel created for his unpublished Waterloo study: 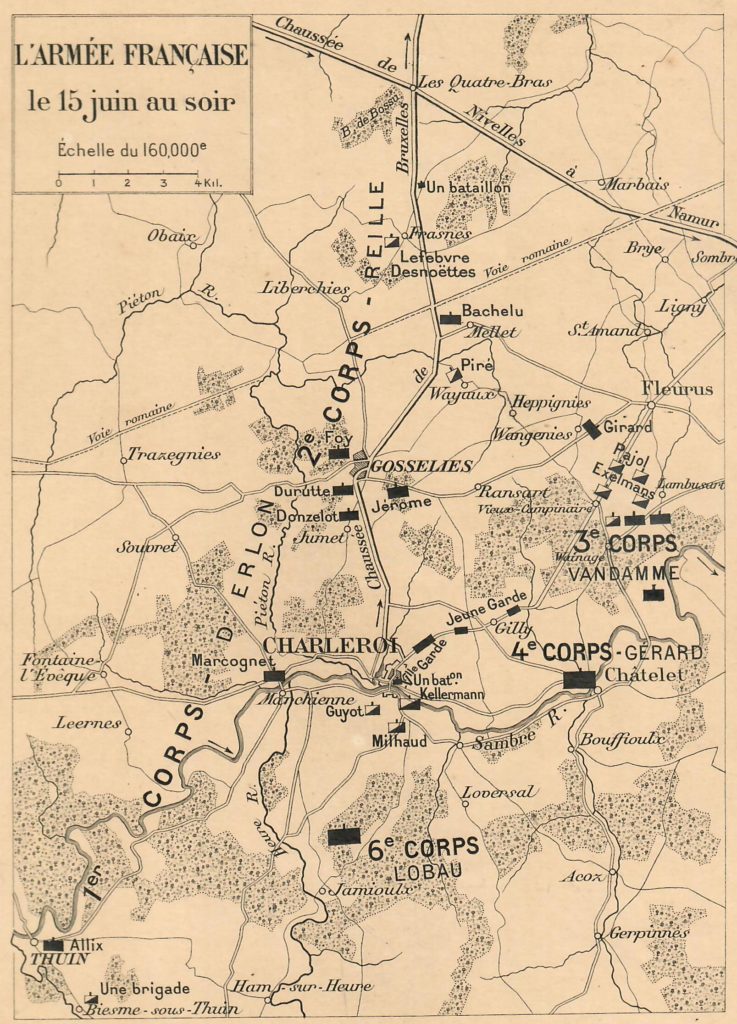