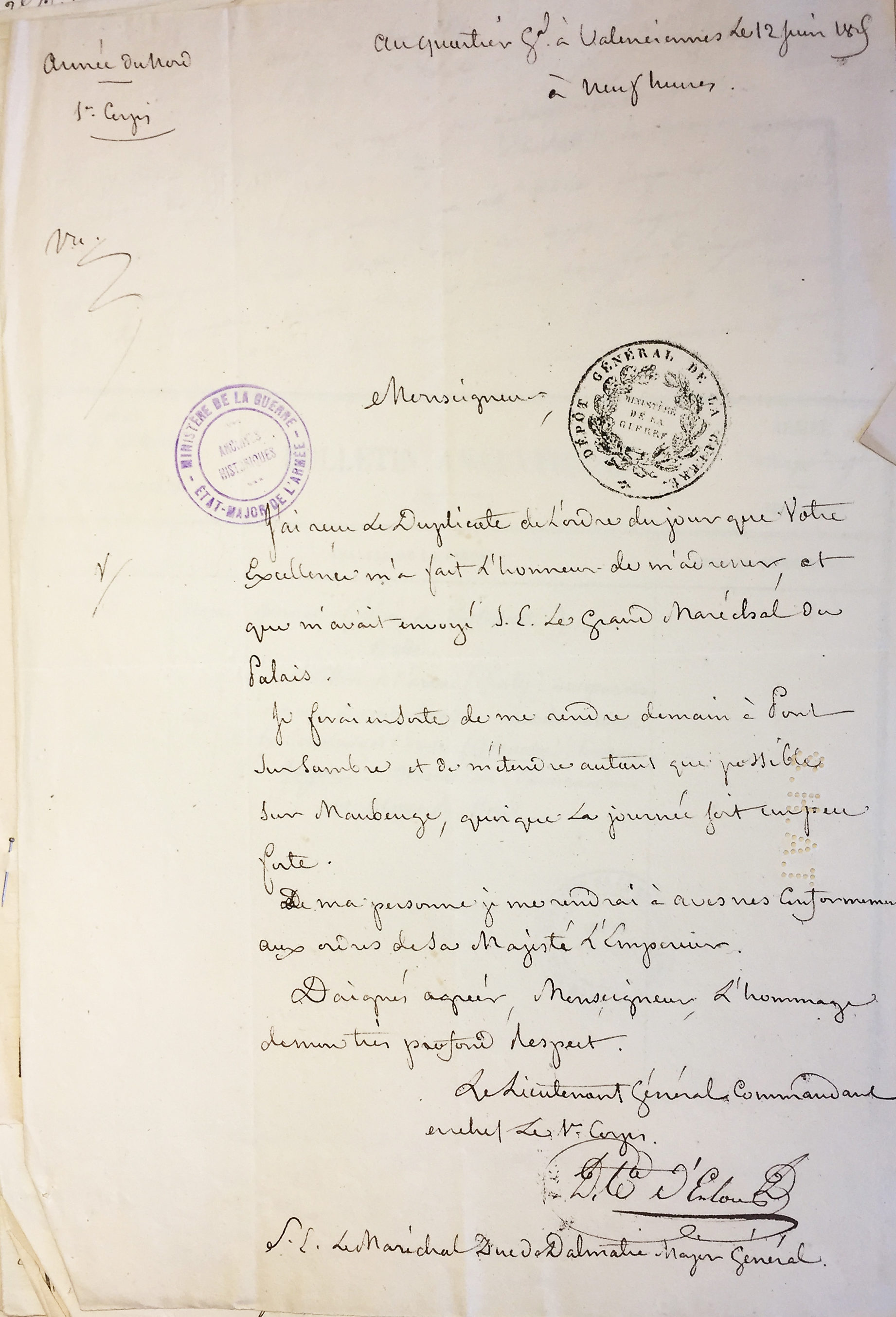 To the Grand Marshal of the Palace,
I have the honor of confirming to Your Excellency receipt of His letter of the 10th of this month and of the ordre du jour that
was there attached.
I will be in person in Avesnes tomorrow and the 1st Corps will also have arrived tomorrow at Pont-sur-Sambre.

To the Major General,

I received the duplicate of the Ordre du Jour that Your Excellency did me the honor of addressing to me and that His Excellency
the Grand Maréchal du Palais had sent me. I will endeavor to get to Pont Sur Sambre tomorrow and I will extend myself toward Maubeuge, although the day will be a bit tough.
In person I will go to Avesnes in accordance with the orders of His Majesty the Emperor.

Even more valuable is the original letter from d’Erlon to Soult, the featured image of this entry, which indicates a response sent at 9pm.

At General Headquarters in Valenciennes, June 12, 1815 at nine o’clock

I received the duplicate of the ordre du jour that Your Excellency did me the honor of addressing to me and that His Excellency the Grand  Maréchal du Palais had sent me.
I will do what is necessary to go tomorrow to Pont sur Sambre and to extend myself as much as possible toward Maubeuge, although the day will be a bit tough.
In person I will go to Avesnes in accordance with the orders of His Majesty the Emperor.
Deign to receive, My lord, the homage of my deepest respect.

The Lieutenant General commander in chief of the 1st Corps
D. Comte d’Erlon

Valenciennes is roughly 40 kilometers from Avesnes, in a straight line. Soult, recognizing delays in dispatching Napoleon’s orders, likely had some urgency, but we have no idea how quickly d’Erlon penned his response. Thus, Soult’s letter may have left Avesnes as late as 5pm, or possibly much earlier. Considering the work load Soult undertook before processing the concentration orders, it seems likely that this didn’t begin until the afternoon. Therefore, it seems reasonable that Soult received the final concentration orders sometime between noon and 4 p.m. This is 12 to 18 hours later than he would have received them had he been in Laon.
D’Erlon indicates that he had been ordered to Pont sur Sambre, which, for 1st Corps, happens to be the position indicated in the Ordre du Jour, Position of the Army on the 13th as well as, roughly where Bertrand’s Mons plan specified. This is important, because, as we have seen, Bertrand appears to have only sent the Generals the Ordre du Jour for Position on the 13th, while Soult was operating under the Mons plan. In this case, they matched roughly, but only the Position of the 13th explicitly stated Pont sur Sambre, which is where d’Erlon indicated he would go.

There is no surviving correspondence between Soult and Reille for June 12. However, as with 1st Corps, 2nd Corps’ orders for the Mons plan and for the Ordre du Jour Position for the 13th are essentially the same, south of Maubeuge. Also, as we have seen, Bertrand sent the Ordre du Jour, Position of the Army on the 13th, twice to Reille – on the 10th and again on the 11th.

On June 12, Reille issued an Order of Movement in response to the orders he had received:

Order of Movement
Tomorrow the 13th of this month the divisions composing the Army Corps will leave their stations to concentrate as follows
The 4th infantry division under the orders of the lieutenant Bachelu will assemble in Beaumont et Solre sur Sambre where
the general headquarters of the division will be.
The 7th division under the orders of the lieut. Gen Girard will place itself in Recquignies, Rocques et Marpent where the
general headquarters of the division will be.
The 6th division commanded by His Imperial Highness Prince Jerome will go to establish itself in Bersilliers, [Bettingies]
and Mairieux where His Highness will place his headquarters in order to have a better artillery route this division will go by
way of Beaumont.
The 9th division under the orders of lieutenant general Foy will place itself in Coleret, Ostergnies and Cerfontaine where
the general headquarters of the division will be.
The 2nd light cavalry division under the orders of lieutenant general Piré in [lature] and [Lantes] where the gen hq of the
div will be.
The reserve battery in ferriere la grande.
The general headquarters of the Army Corps will be established in Solre sur Sambre.
The movement of concentration must be done in a way that deprives the enemy of knowledge of it, as a consequence the 6th 5th and 7th infantry divisions will leave their outposts on the line where they are placed, ordering again the greatest surveillance such that nobody can cross the borders and give knowledge to the enemy of what is happening to the rear.
For the same reason, if one is called to light a fire, it must only be done on [the banks] or in the background from where
they cannot be seen at all.
This care will be given every time that we are in the presence of the enemy, or that there is the possibility of being seen by them.
One superior officer per division will be left to take command of the outposts that remain on the line, this officer will be
responsible to rally them as needed and according to the orders that will be given to him to rejoin his division in the movements
that the Army Corps may make.
The auxiliary equipages having not yet arrived, the reserves of hard bread for the 6th division that must be transported
from Avesnes to Solre le Château will follow the movement of his division on the requisition cars.
The reserves of hard bread for the other divisions will be loaded under the care of the ordonnateur en chef to (render/
transmit) the movement of the Army Corps.
The soldier that must already have four days of bread must take enough more for two days either in fresh bread or in hard
bread such that he is served until the 18th included. The 6th division will receive this distribution by means of the bread
that left from Avesnes.
The other divisions will receive it in Maubeuge. The cavalry must take it in Avesnes.

The images of Reille’s registry are below.

Reille positioned 2nd Corps in two columns, south of Maubeuge, on the road to Thuin, exactly as ordered in the Position of the 13th.  Like d’Erlon, the Mons plan and Charleroi plan were similar. 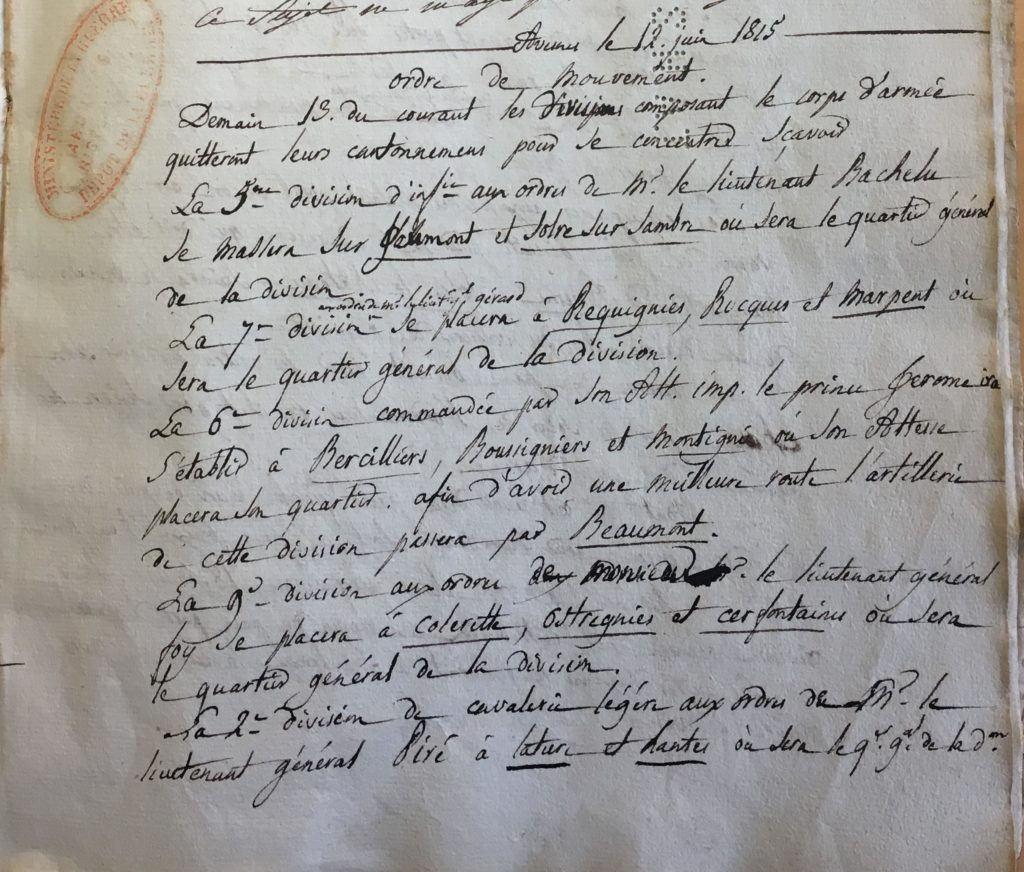 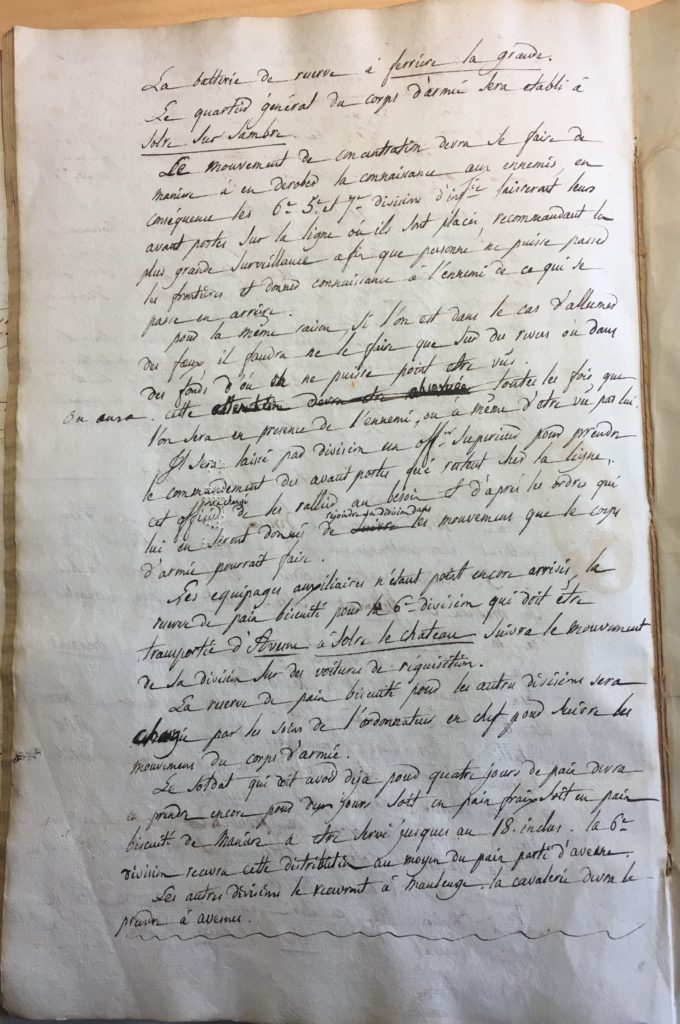