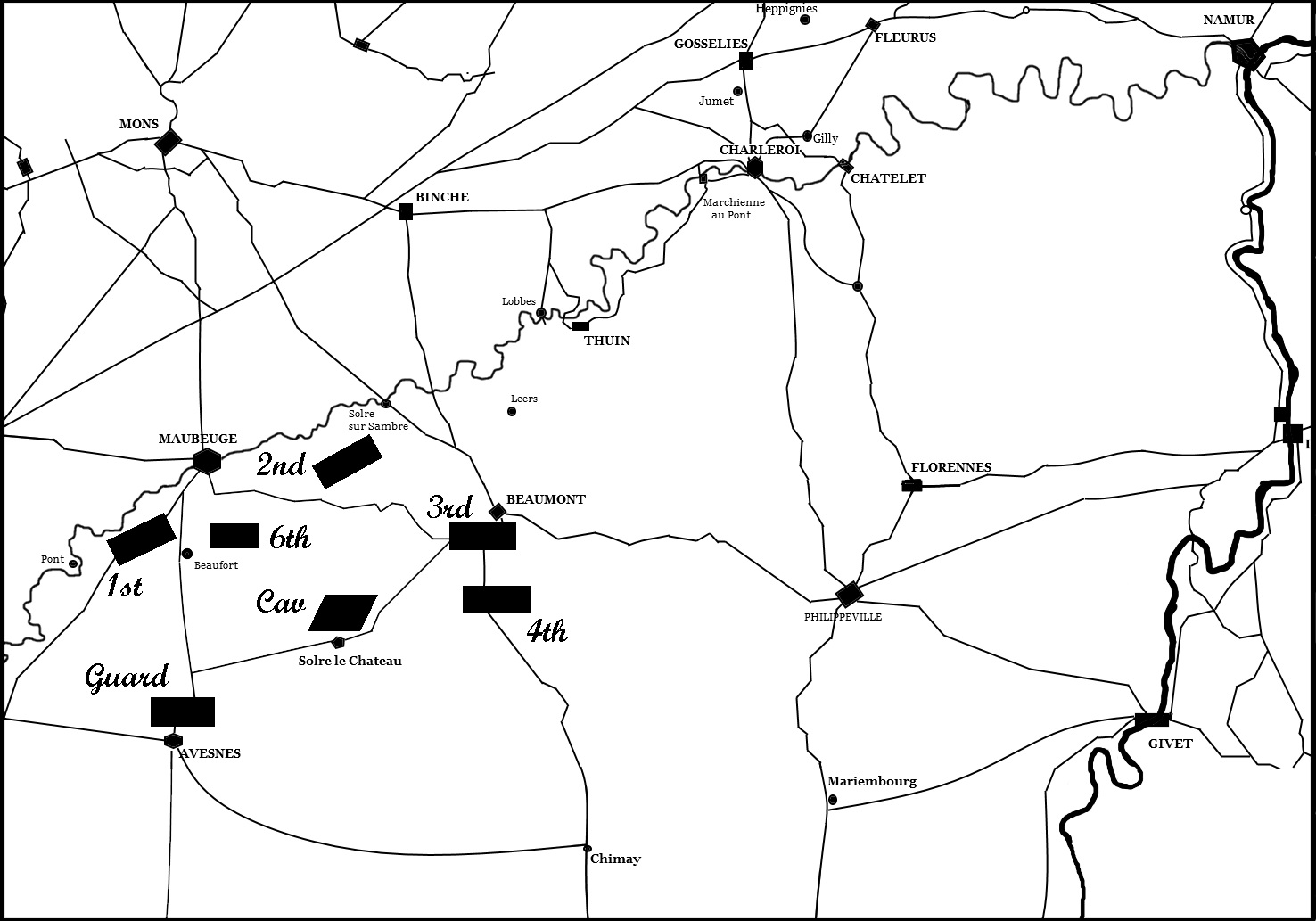 Having issued orders to the Army, except the Guard, Soult sent a report to Napoleon:

Sire,
In executing the order that Your Majesty gave on the 10th of this month, I ordered the following dispositions regarding the position that the various Army Corps must take on the 13th:
The 2nd Corps on the Sambre, above Maubeuge until Solre sur Sambre, occupying the towns of Hantes, Montignies, Bouzingies, Bersilies, Colleret, Cerfontaines and Ferrières la Grande.
The 1st Corps, between Pont-sur-Sambre & Maubeuge, holding ready to lead out on one or the other banks of the Sambre, as Your Majesty shall order it.
The 3rd Corps in Beaumont
The 6th Corps in Beaufort where the General Headquarters will be, Fontaines, Lismont, Eclaibes, Dimont, Dimechaux,
Watignies, Choisy, Damouzie, Aubrechie & Ferrière la Petite.
The 1st, 2nd, 3rd & 4th Cavalry Corps, under the orders of Marshal Grouchy, in Solre-le-Château and in the towns of [Sartz], les Fontaines, [Offie], Epine Harnaut, Clairfait, l’Epinoy, Beaurieux, Grandrieu Hestrud, Leugnies, Coursolre, [Aibe], Quievelont, Solrinnes, Eccles.
The artillery parks and équipage de Ponts will be positioned in front of Avesnes, several towns were left vacant so they can set up their horses there.
The city of Avesnes is left at the disposal of Your Majesty’s guards, as are the towns behind & those of the Vallée de la Helpe, to the right and left of Avesnes.
According to the Reports that I have received from Comte Gérard, the 1st Division of the Armée de la Moselle should arrive on the 13th in Rocroi, the 2nd Division on the 14th, the 3rd Division on the 15th, the Cavalry Division and the artillery park on the 16th. I wrote to him immediately that your Majesty had understood that he would be returned in entirety on the 13th & that I had given him orders to that effect, I thus reiterated the order to hurry the march of his troops, such that they make up the time they have lost, he must have this army’s movement continue & he will direct it by way of Chimay, to Beaumont, where he will form the 2nd line of 3 Corps, and will follow it on its march to the Sambre, if this Corps has moved forward.
General Delort, Commanding the 14th Cavalry Division, wrote to me from Metz, the 9th, that his Division would arrive on the 13th in Mézières & that it could only arrive in Hirson, its destination, on the 15th. I sent him the order to go from Mézières to Rocroi, Chimay & Beaumont, where he can arrive on the 15th, it will thus be at the line with the rest of the Cavalry; I have informed Marshal Grouchy of this. 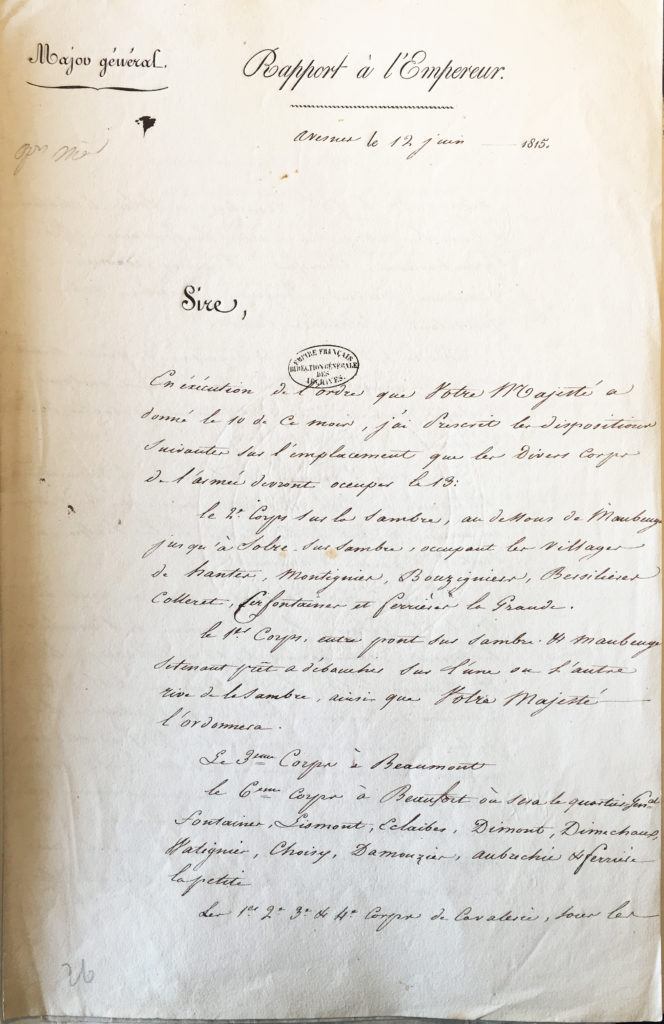 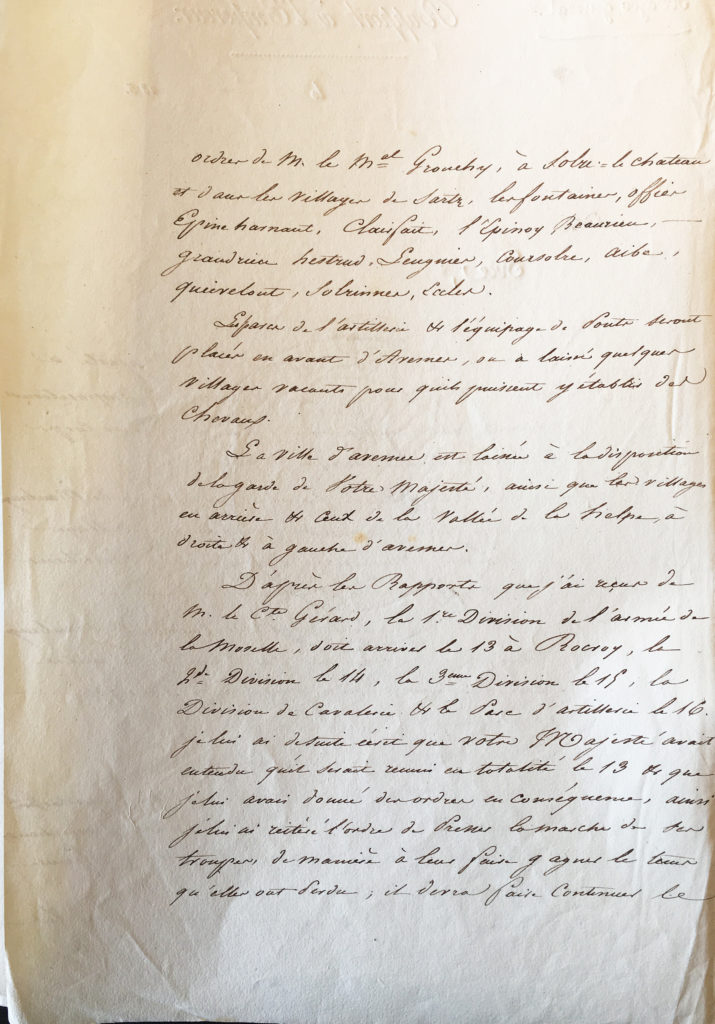 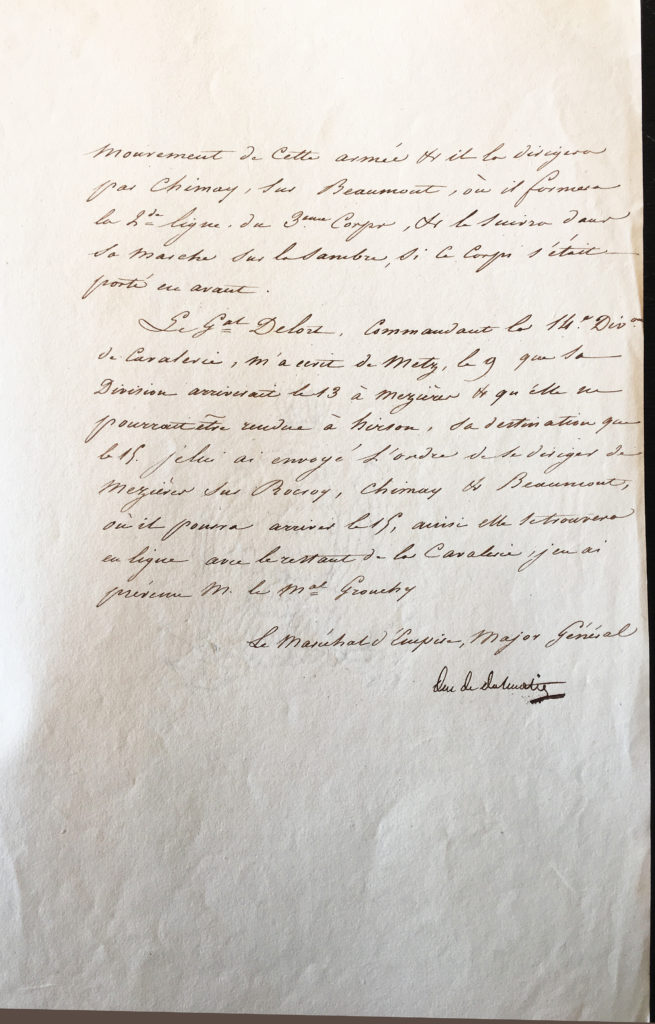