Soult’s Report about Army Disposition for June 12 including Gérard 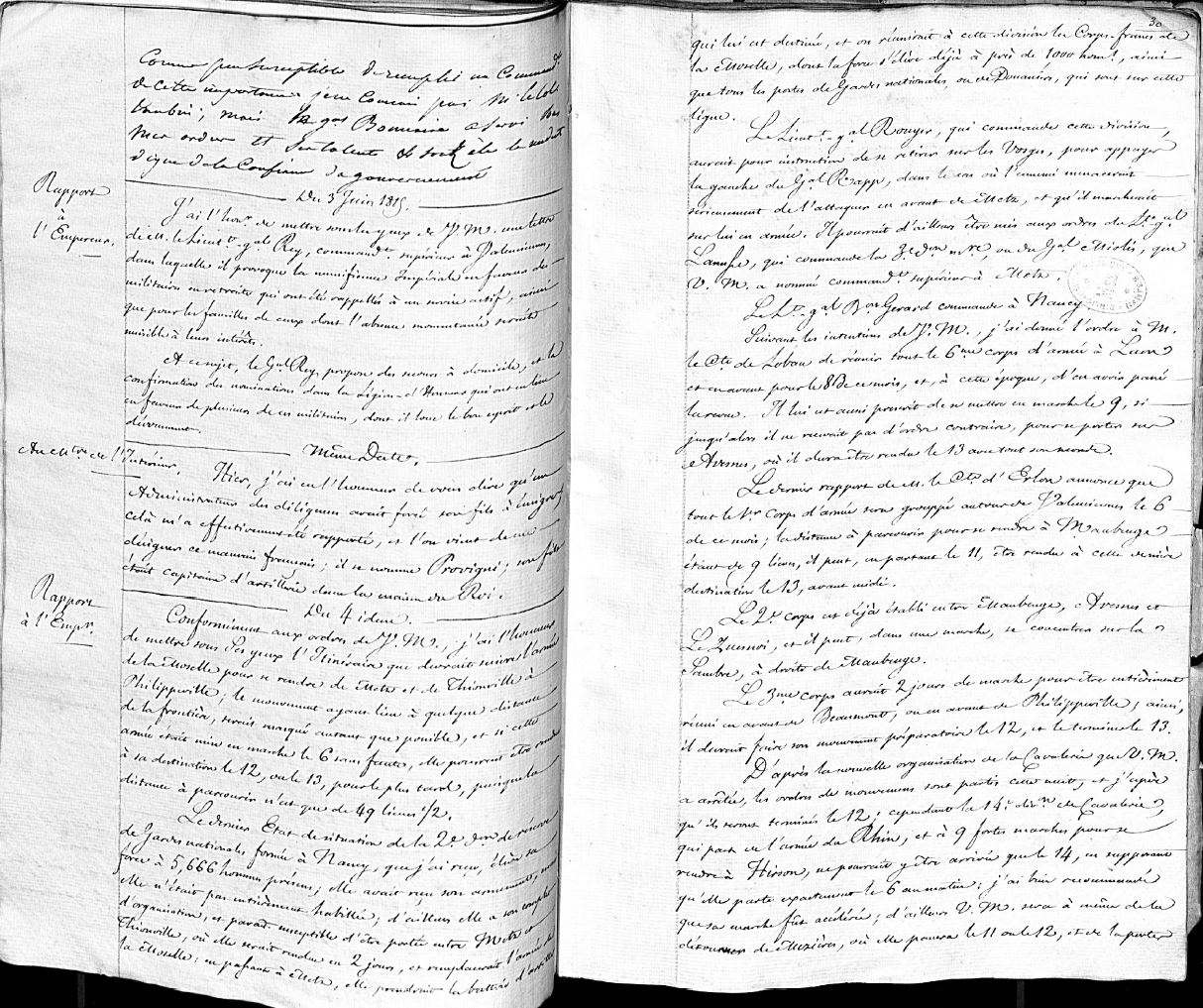 In accordance with the orders of Your Majesty, I have the honor to put before his eyes the itinerary that the Armée de la Moselle should follow to go from Metz and Thionville to Philippeville; the movement taking place some distance from the border, would be as much as possible, and if this army were set in motion without fail on the 6th, it could be returned to its destination on the 12, or the 13th, at the latest, since the distance to cover is only 49 1/2 leagues.

The latest status report of the 2nd reserve division of National Guards constituted at Nancy, that I have received, brings its force up to 5,666 men present; it had received its weapons, but it was not entirely uniformed; furthermore it has its complete organisation, and appears apt to be brought to between Metz and Thionville, where it would be in 2 days, and would replace the Armée de la Moselle; in passing by Metz, it would take the artillery battery that is destined for it, and the Corps-francs de la Moselle, the force of which is already amounts to nearly 1000 men, would be united to this division, as would all of the posts of National Guards, or Customs officers, that are on this line.

Lieutenant General Rouyer, who commands this division, would have for instructions to withdraw over the Vosges, in order to support the left of General Rapp, in the case in which the enemy were seriously to threaten to attack it forward of Metz, and that it were to march on it as an army. It could furthermore be put under the orders of Lieutenant General Lanusse, who commands the 3rd military division, and of General Miolli, whom Your Majesty named superior commander in Metz.

In accordance with the plans of Your Majesty, I gave the order to M. Comte Lobau to unite all of the 6th army corps in Laon and forward on the 8th of this month, and, at this time, to have reviewed it. He has also been ordered to begin to march on the 9th, if he has received no contrary order prior to then, in order to go to Avesnes, where he must be on the 13th with all his men.

The latest report from Comte d’Erlon announces that all of the 1st Army Corps will be gathered around Valenciennes the 6th of this month; the distance to cover to go to Maubeuge being 9 leagues, it can, in leaving the 11th, have arrived in this last destination on the 13th, before noon.

The 2nd corps is already established between Maubeuge, Avesnes and Quesnoi, and it can, in one march, concentrate itself on the Sambre, to the right of Maubeuge.

The 3rd corps would have 2 days to march in order to be entirely gathered in front of Philippeville; therefore it must make its preparatory movement on the 12th, and complete it on the 13th.

According to the new organisation of the Cavalry that Your Majesty has established, the orders for movement went out tonight, and I hope they will be completed on the 12th; however the 14th Cavalry division, which left the Armée du Rhin, and has nine heavy marches to get to Hirson, can only arrive there on the 14th, assuming that it leave precisely on the 6th in the morning; I have accordingly recommended that its march be accelerated; furthermore, Your Majesty will be able to divert it from Mézières, where it will pass by on the 11th or 12th, and to bring it directly to Philippeville, from where it would converge, on the Sambre, with the 4th Cavalry corps, towards the 16th of this month.

On the 12th, each Cavalry division, destined for an Infantry army corps, will have gone there, and the 4 Cavalry corps will be established as follows.

The 1st Corps Cavalry at Marle, from where it will report on la Capelle and Nouvion

However, the 4th corps will have, at this time, only one division (the 13th) assembled at Cateau-Cambrésis; the other division (the 14th) will be marching to Hirson or Philippeville as I have said.

All of the Cavalry will thus be able to be brought to the line, on the Sambre, on the evening of the 13th, or the morning of the 14th.

Your Majesty has deigned to inform me that the Imperial Guard will be in Soissons on the 10th, and that it will be able to be on the 13th in Avesnes.

The totality of the troops that Your Majesty proposes to employ on the line of operation can therefore be ready to cross the Sambre, below Maubeuge, and to move on forward of Philippeville, the 14th or the 15th of this month.

I have the honor to put before the eyes of Your Majesty the status report of the Armées du Nord, de la Moselle, du Rhin, and of the observation corps of the Jura, indicating the presumed force of each of these corps on the 14th of this month, as well as the detail of the cavalry and the artillery.

I also have the honor of putting before the eyes of Your Majesty the status report of the divisions of the National Guards and the status of all the garrisons, following the latest reports that have reached me.