The Advance of the Center

Home/The Advance of the Center 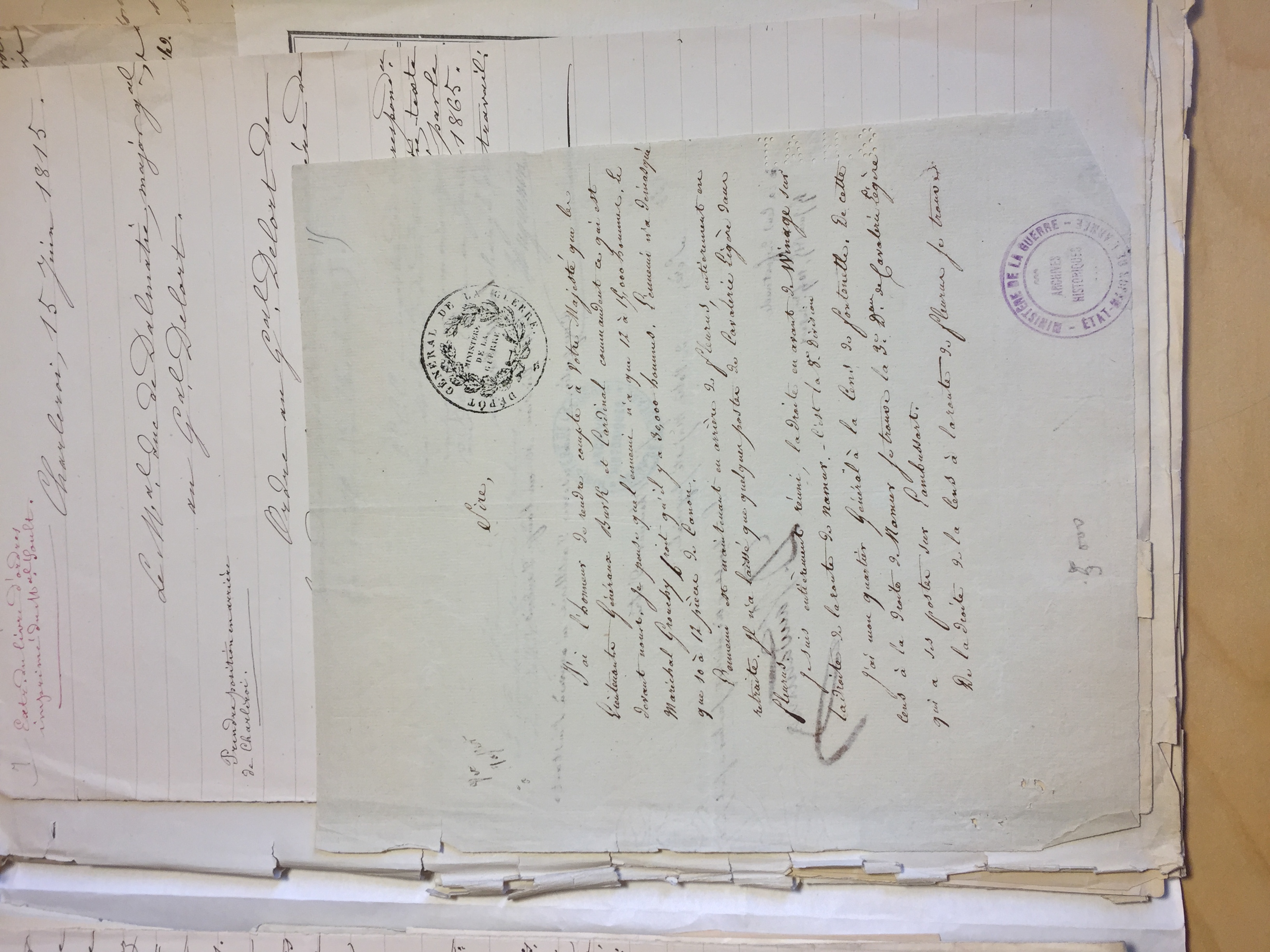 June 15 - The Advance of the Center

On the morning of June 15, 1815, Vandamme’s 3rd Corps of Napoleon’s Armée du Nord failed to advance at its proscribed time. This delay would ripple through the rest of the 15th and the 16th, allowing the Prussians more time to concentrate and rest after their forced marches during the night of June 15.

While the delay has had numerous explanations, Houssaye summarizes the one most commonly repeated, found in 1815, Waterloo:

Vandamme, who was to have set out at three o’clock, awaited still at five the instructions from the imperial headquarters. During the night the officer who bore the order of march fell from his horse, broke his leg, and remained inert and isolated in the midst of the fields. Vandamme was informed of the march of the Army only by the arrival of Lobau’s corps in the rear of his bivouacs.

The broken leg story first appeared in Janin’s Campagne de Waterloo: Ou Remarques Critiques Et Historiques published in 1820. When 6th Corps ran into the immobile 3rd Corps, Janin was sent to determine what the problem was, and found their camp, “…as quiet as if they were to remain there: the soldiers cleaned their arms, adjusted or mended their belongings, and I surprised the officers by announcing that the army, gathered and pressed to their left, wait to depart to continue its march halted in a rather unpleasant way by their inaction.” He went on to explain:

I waited yet a long time, and, not being able to understand the reason for this delay, I headed towards the headquarters of Comte Vandamme, when I met an officier-général who, when I announced to him the subject of my concern, told me that the orders addressed to General Vandamme in the night had not reached him, because the senior officer, who was the lone carrier, had fallen off of his horse, and had broken his thigh before being able to fulfill his mission. At the same time General Rogniat, who walked to the head of the grand park, came forward, and received, I believe, the same information. It is true that in his Considérations sur l’art de la guerre this general, having true appreciation of the facts, merely says that Napoleon stopped in Charleroi, either that he was delayed by the bad weather, or by other reasons. If he did not believe he had to reveal these reasons was it because he did not find the degree of certainty necessary to be presented as historical documents? I would be tempted to believe this, because the explanation given by General Gourgaud is far from consistent with what I saw and which I have just reported. It is no less certain, as was very well noted by the expert and  judicious author whom I have just mentioned, that all success depended on the speed of this first movement, that nothing was to be neglected to ensure its execution.

Rogniat is not alone in not finding the story credible.  It is possible he knew the officer who carried the letter.

The Registre du major-général was printed in Grouchy’s Relation succincte de la campagne de 1815, and a hand copy was donated to the French archives, BNP, FR. Nouv. acq. 4366.  As seen, the Ordre du Mouvement for June 15 lists the carriers of the orders, and for Vandamme the name that is given is Faviers.

Faviers is an uncommon name, but Favier is very common.  The added ‘s’ is a simple transcription mistake – one that when transcribing the 2,400 documents found in Operations of the Armée du Nord : 1815 happened frequently. 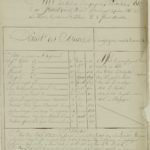 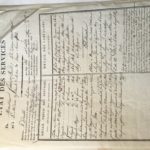 Captain Benoit Favier was posted to the army staff in 1815. One of his service records even says he was wounded at Waterloo, but with lances.  Nothing suggests he broke a leg.

A late-19th century expert on French operations, Eugène Stoffel, wrote a study on the campaign, but he died prior to its publication. While not an eyewitness, his uncle, Christoph Stoffel, was a member of Soult’s staff. Eugene quoted his uncle on other matters relating to the campaign; therefore, he may have been privy to a first-hand account. In a draft of his book he stated the following:

On the 15th of June, the left and right columns started at daybreak, in accordance with the order of movement. This was not the case in the center column. There, the cavalry divisions of General Pajol And the Guard departed well at the present time, but the third corps of infantry, which should have broke camp at half-past two in the morning, was still there at six o’clock. This delay was due to the negligence of the Major General who, by the evening before, sent the order of movement to the commanders-in-chief, had not demanded that those in charge of carrying it return to him an acknowledgment of receipt, that they had fulfilled their mission. Now it had happened that the captain of the General Staff sent on the 14th in the evening to bring the order of movement to the 3rd Corps had not found General Vandamme camped in the middle of his troops as enjoined to him the agenda of June 13, that he had long searched for nothing, and, surprised by the darkness of the night and having broken his thigh, he had not fulfilled his mission. It had been necessary for General Rogniat, who had been instructed to march with the sappers after the regiment of the 3rd Corps, to search for General Vandamme and let him know what orders should have been sent to him.

Here we learn that the rider was a captain, and the story that he fell and broke his leg is repeated. Soult was blamed for not demanding a receipt, which would presumably have been noticed when the mission failed. Vandamme was blamed for not being with his troops, which ultimately contributed to the mishap. Hence, the conventional narrative continued. As Favier was not a member of Vandamme’s staff, we can only wonder if this incident was the source of Napoleon’s comment in the orders given to Soult on June 16, “Recommend to each General to send an officer to take orders so that today’s mess does not repeat itself.”

General Vandamme had his army corps, whose well-ordered march had been as smooth as a parade maneuver, halt at Ham sur Heure just before Marbaix. Hampered by the disorderly march of the Imperial Guard, they had had no choice but to stop. It was then that Gen. Vandamme said to several generals of the Guard and to a Colonel (Stoffel), adjutant to the Major Général, that such a march would lead to the Isle of Elba, and if on the contrary they wished to see the road to victory, they would find it in the discipline of the 3rd Corps. The fact of the matter is that the infantry, the cavalry, the artillery and the baggage of the Guard all marched together, and they exhibited the lack of discipline which has become the source of your defeats.

Despite Napoleon’s threats on the presence of baggage, it was found in the march, a complaint that is sprinkled through accounts of the period.  This officer was certainly not about to find fault with Vandamme or the 3rd Corps this day either.  The orders are addressed as follows:

At daybreak on the 15th, General Vandamme had traveled the camps. He sent his first Aide-de-camp to the Emperor to receive his orders; he had come to the conclusion that if those orders had not yet reached him, then at least one error had been made. It was not error, but that the officer dispatched to him had had an accident and his horse had broken a leg. General Vandamme, seeing troops disperse to his left and to his right, resolved that he would start moving his Army Corps toward Charleroi so that no time should be lost, except that he needed to wait for the orders that were not long in reaching him. These orders stated that the Emperor and the rest of the army were marching toward Charleroi and that the 3rd Corps were to get
themselves there without delay.

An accident, exacerbated by Vandamme’s absence from his expected location and/or because Vandamme did not send an officer from his staff to the army headquarters, occurred when the rider was unable to find Vandamme in the darkness of night. In this accident, Favier’s horse broke its leg, and the orders are delayed.  An altogether minor adjustment to the conventional narrative, but one that aligns the surviving documentation.

Continuing with the Mémoire:

Thus positioned, Gen. Vandamme received orders from the Major Général to have his army corps move via Ham-Sur-Heure, so as to leave the route which we held free for the rest of the army. The army corps set forth at once. It did not encounter any obstacles and arrived at the plains of Charleroi before the troops who had sought to overtake them. The army corps formed up on this plain and was soon on the march to pass through Charleroi, taking position one and a half leagues before the city, just ahead of the village of Gilly. It was one o’clock in the afternoon at that time. The Emperor, who was positioned just outside Charleroi, saw the entire corps march past. I can’t tell you how ecstatic the troops were. The march of the 11th div. was grueling. The Army marched through Charleroi together: infantry, cavalry, artillery, Guard, Line, all marched past together. Gen. Vandamme had quite a clash over this with the Major Général and with the Emperor. By this time, we were in the presence of the enemy, who occupied the Fleurus route and were well-positioned in proportion to their number. There was a woods to their rear which stretched roughly 150 toises from the village of Lambussart: the road to the village was level and wide, with a ditch to either side.

Napoleon directed a smart attack against a Prussian rear-guard at Gilly where Letort, who Hobhouse had spoken to in Paris, was killed.  Due to Vandamme’s delay, the march of the center column was jumbled.  Elements of the Guard would pass Vandamme and Lobau’s 6th Corps.  Vandamme would eventually end up in the vanguard, though 6th Corps ended up in the rear and did not even cross the Sambre.

At 10pm that night, Vandamme would report:

I have the honor to report to Your Majesty that Lieutenant Generals Burth and Cardinal command what is before us. I think that the enemy has only 12 to 15,000 men. Marshal Grouchy believes that there are 30,000 men.
The enemy revealed only 10 to 12 cannons.
The enemy is now behind Fleurus, completely in retreat. They left only some light cavalry posts in Fleurus.
I am entirely assembled; the right in front of Winage to the right of the Namur road. It is
the 8th Division.
I have my headquarters at the Fontenelle farm. From this farm on the right side of Namur is the 3rd Light Cavalry Division which has its posts in Lambusart.
The 10th Division is to be found from the right of the Farm to the Fleurus road.
The 11th Division is at Camp d’Andois.
Part of my artillery reserve is arriving here right now. 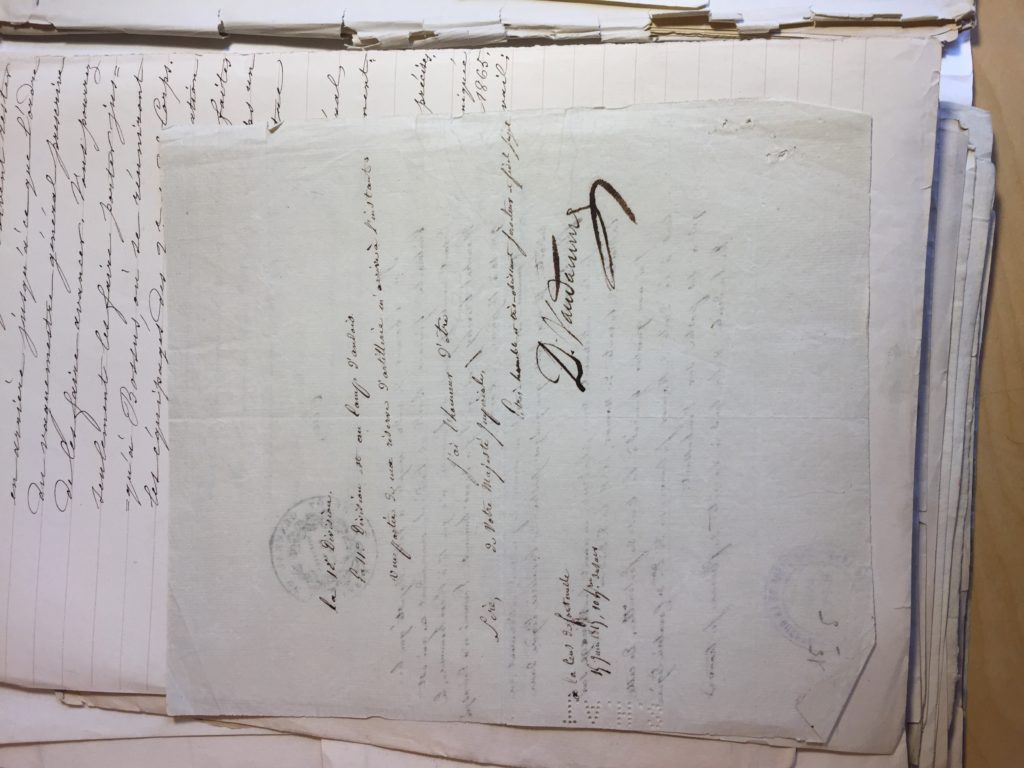