The Advance of the Left

Home/The Advance of the Left 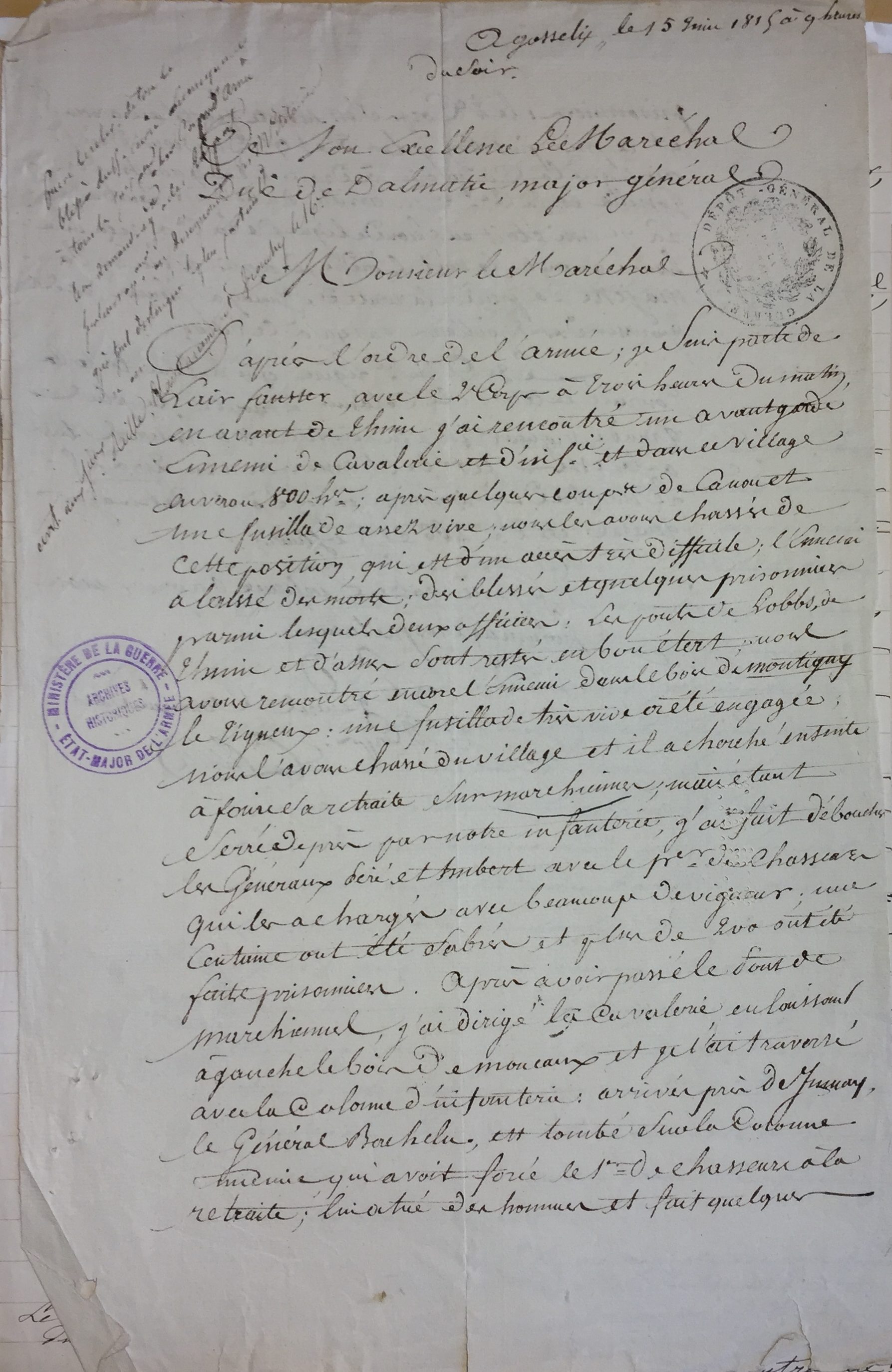 The left column encountered none of the difficulties the center and right had faced.

Reille’s 2nd Corps moved out promptly at the appointed time. By 7 am, Thuin had fallen. Marchienne-au-Pont fell and the Sambre was crossed by 1 pm. Gosselies was taken by 5 pm, and Girard’s 7th division pursued the Prussians as far as Wangenies, directly west of Fleurus. Frasnes was occupied by 9 pm. Elements of Reille’s Corps had covered over 30 kilometers while beating back the Prussian outposts.
The sounds of the combat at Gilly and the presence of the Prussians in mass at Fleurus presented a significant concern. If 2nd Corps had advanced in strength on Frasnes or beyond, with a Prussian army massing in its right rear and an Anglo-Dutch army still unaccounted for, it ran a very real risk of isolation and destruction. Thus, most of 2nd Corps was halted around Gosselies, while Girard’s 7th division had been left west of Fleurus to observe the Prussians. Bachelu’s 5th Division and the Imperial Guard light cavalry moved forward and the cavalry occupied Frasnes.
Hence, the advance of 2nd Corps was also a victim of Vandamme’s delay. Without the delay, 3rd Corps would have pushed through Gilly and beyond Fleurus. This, in turn, would have led to 2nd Corps advancing in strength beyond Gosselies, possibly to Frasnes or beyond.

Reille sent the following report to Soult at 9pm: 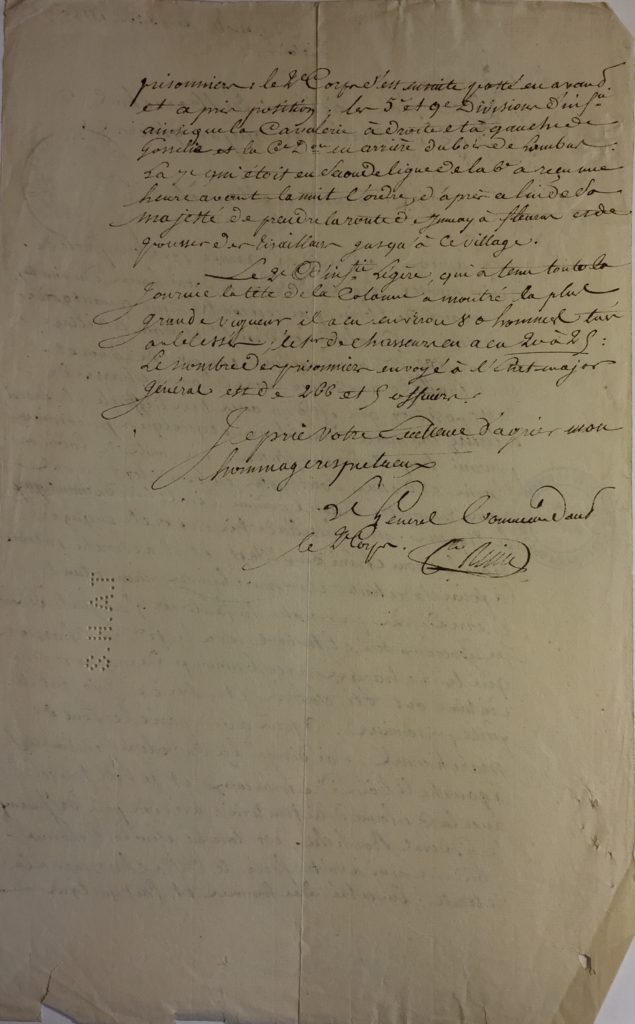 On May 17, 2006, 4 pages of Soult’s notes sold at auction that dealt specifically with planning the advance on Charleroi and included details on the orders for Reille.  As we have seen, Soult’s notes/dictations were key to understanding other complex periods, such as June 6 and June 12.

D’Erlon’s 1st Corps did not leave promptly, but this did not make any impact. The 90 minute delay, and the distance between 1st Corps and 2nd  Corps, was more than made up by 1st corps frequently waiting while 2nd Corps faced tenacious Prussian resistance.

At 10 am, Soult sent orders to d’Erlon instructing him to cross at Marchienne au Pont and to send reconnaissance towards Mons and Nivelles. Regardless of what Napoleon expected Wellington to do, he would have been very mindful of the flanks of his army while they advanced. Had Wellington chosen to concentrate at Mons, and had this already been underway, then it posed a significant threat to both the French army’s rear and to their lines of communications.

At 3 pm, Soult sent the following order to d’Erlon from Charleroi:

Count d’Erlon, the Emperor orders Count Reille to march on Gosselies and to attack there an enemy corps that appeared to stop there. The intention of the Emperor is for you to march on Gosselies to support Count Reille and assist in his operations. However you must continue to guard Marchienne and you will send a brigade on the Mons road, recommending its commander to guard itself very militarily.

Per the Order of Movement, d’Erlon had left the 1st Division at Thuin and intended to leave the 3rd Division at Marchienne-au-Pont. Given this new order, he was unsure whether he was to maintain the garrison at Thuin, thus, at 4:30 pm, d’Erlon sent the following report to Soult, seeking clarification:

Monseigneur,
I received the two letters that your Excellency has done me the honor of writing to me today. The first was given to me in Montigny-le-Tigneux and I just received another at Marchienne. Under yesterday’s general order I left a brigade of cavalry in Solre and Bienne-sous-Thuin, and my infantry division at Thuin, Lobbes, and Aulnes abbey.
My other troops begin to arrive at Marchienne, as soon as the last units of the 2nd Corps has filed past, I will have them cross the Sambre, I will place a brigade on the Mons road, another brigade will remain ahead of Marchienne and with the two other infantry divisions I will march on Gosselies.
I saw the position of Thuin; it is very strong as it is, but given what the localities are, we cannot establish a bridge head there. I ask Your Excellence to let me know if I should still leave troops at Thuin, Solre, and surroundings.
Deign, Monseigneur, to accept my deep respect, 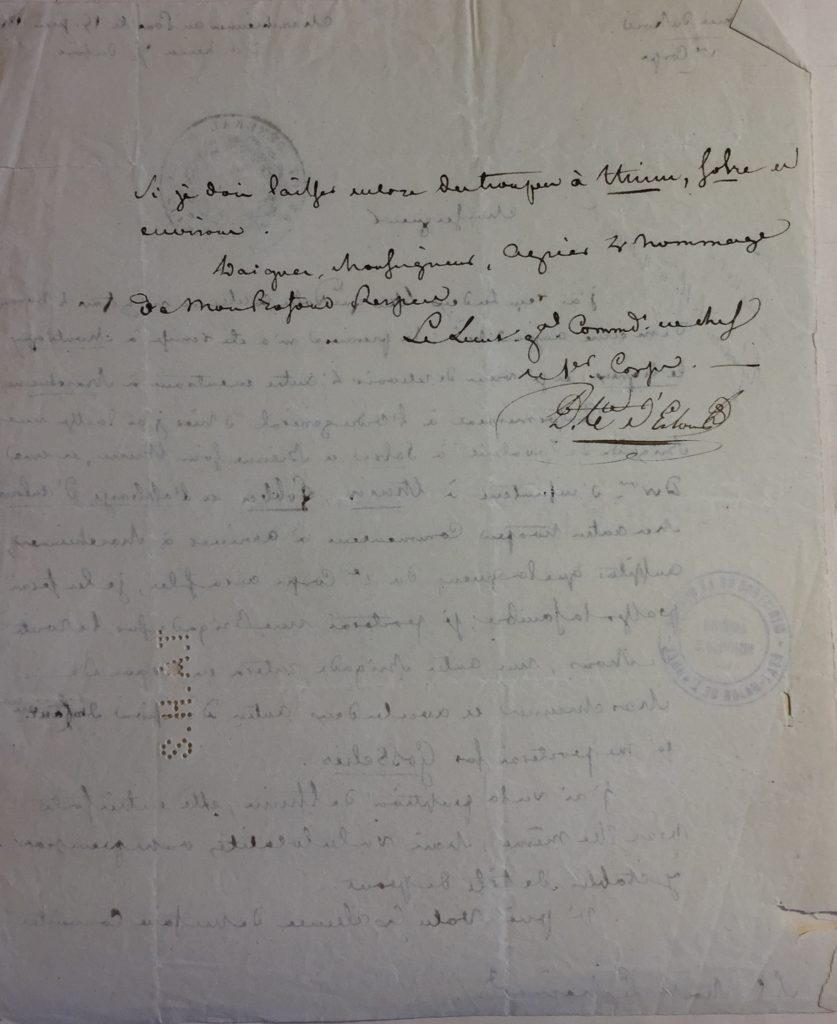 From this report, we can see that, despite d’Erlon’s morning delay, 1st Corps was now waiting for 2nd Corps to complete its crossing of the Sambre. 2nd Corps had not yet been impacted by Vandamme’s delays, which proves that d’Erlon’s initial delay was inconsequential. D’Erlon indicated that he would march on Gosselies with two infantry divisions, and asked specifically if he should bring the division and cavalry left in the rear at Thuin across the Sambre.
Early in the evening d’Erlon sent Soult another report, again asking about the divisions that he had left in the rear:

Monseigneur,
In accordance with the Order of Y.E. as of today, 3 pm, I was directed to Gosselies. I found the 2nd corps established there; consequently I placed my fourth division behind this village, and my second in front of Jumay, the cavalry brigade is in the latter place.
The 3rd Division remained in Marchienne and the 1st in Thuin, my other cavalry brigade is in Solre and Biel-sous-Thuin, which disperses my troops very much; I pray Y.E. to kindly let me know if I must recall those I left behind.
The reconnaissance party that I sent to Fontaine-l’Eveque learned that 1500 Prussians, who were there this morning with three pieces of artillery, left at noon heading on Marchele-le-Chateau; they took with them a lot of cattle.
I await the order for tomorrow which will be carried by the officer who will have the honor to give this letter to Y.E. I ask acceptance of my deep respect. 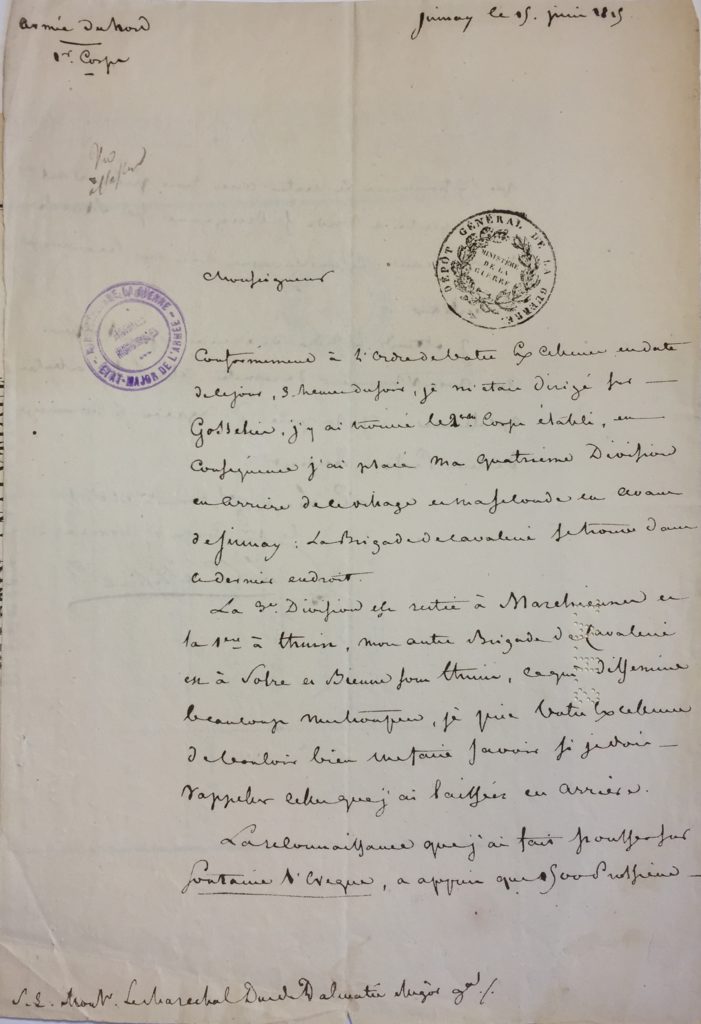 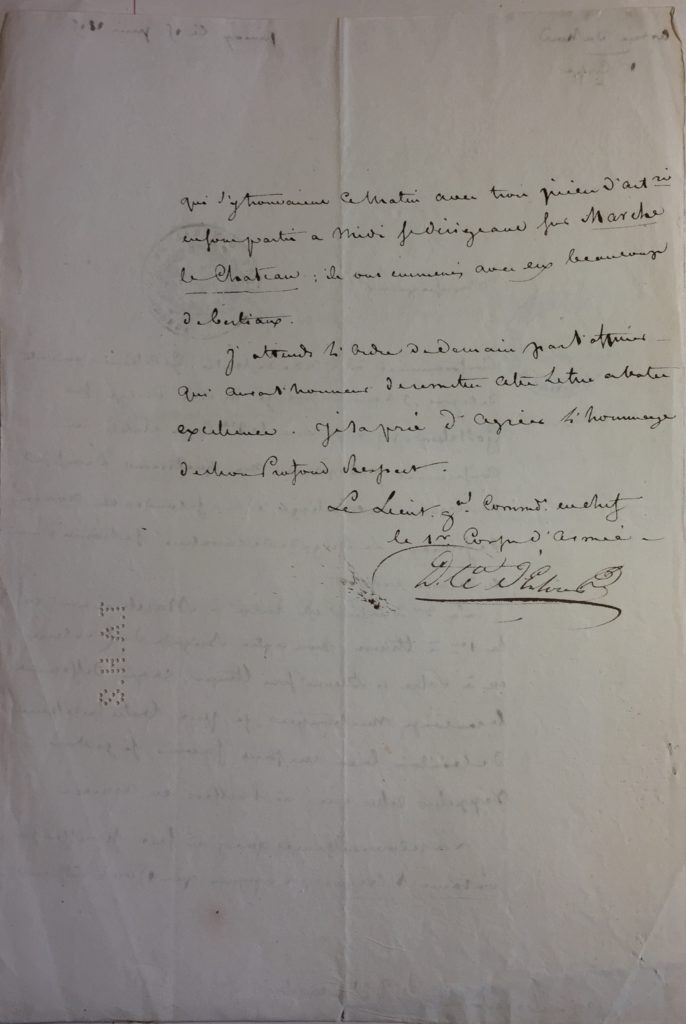 As the 15th ended, d’Erlon’s Corps was positioned exactly as his report stated, with the 1st Division in the vicinity of Thuin, and the 3rd division at Marchienne-au-Pont. While every other Corps in the Armée du Nord was reasonably consolidated, 1st Corps was distributed across over 20 kilometers.

In the afternoon of the 15th, Marshal Ney had arrived at the front and was given command of the left wing. Ney had a few aides, and had apparently collected orderlies from the light guard cavalry division on his wing. He certainly lacked the full complement of staff one would expect in order to command two Infantry Corps and a Corps of Cavalry. Furthermore, he did not know the positions of his forces. During the afternoon, he scrambled to gain control of his wing, but even at the end of the day, his results were incomplete, as seen in his 11 pm report to Soult:

Gosselies, June 15, 11 pm
Marshal,
I have the honor to report to Your Excellence that, in accordance with the Emperor’s orders, I went this afternoon to Gosselies to dislodge the enemy with General Piré’s Cavalry and General Bachelu’s Infantry. The enemy made only a slight resistance; we exchanged 25 to 30 cannon shots; he withdrew through Heppignies on Fleurus.
We took 5 to 600 Prussian prisoners from General Zieten’s Corps.
Here is the position of the troops:
General Lefebvre Desnouettes with the Lancers and the Chassuers of the Guard at Frasnes.
General Bachelu with the 5th Division at Mellet.
General Foy with the 9th Division at Gosselies.
General Piré’s Light Cavalry at Heppignies.
I do not know where to find General in Chief Reille.
General Count d’Erlon informs me that he is in Jumet with the greater part of his Army Corps. I have just transmitted the arrangements to him, prescribed by the letter from Your Excellency, dated today.
I am enclosing in my letter a report from General Lefebvre-Desnouettes.
Accept, Marshal, the assurances of my highest regards,
Marshal Prince de la Moskowa,

While Ney was in command of the left wing, it is unclear exactly when he had full operational control of 1st Corps. Based on the correspondence, d’Erlon was still reporting and seeking direction from Soult late into the night of the 15th. Furthermore, the information Ney has was utterly wrong – d’Erlon did not have most of 1st Corps assembled at Jumet. Soult knew this, and, seemingly in response to Ney’s report, he sent the following order to d’Erlon near midnight:

To Count d’Erlon, Commander of the 1st Corps
Charleroi, June 15, 1815
Count, the intention of the Emperor is that you rally your corps on the left bank of the Sambre, to join the second corps at Gosselies, according to the orders Marshal Prince de la Moskawa will you give on this subject.
Thus, you will recall the troops you have left to Thuin, Sobre, and surroundings;  you must however always have many parties on your left to scout the Mons road.

Soult finally gives clarification – the entirety of 1st Corps is to cross the Sambre, including the troops at Thuin, which Soult knows, from the previous reports, have remained behind. Curiously, this order was not present in the copy of the Registre du Major-Général, later provided by Grouchy.

Keeping a vigilant watch on the west towards Mons remained d’Erlon’s primary mission.