The March of Gérard 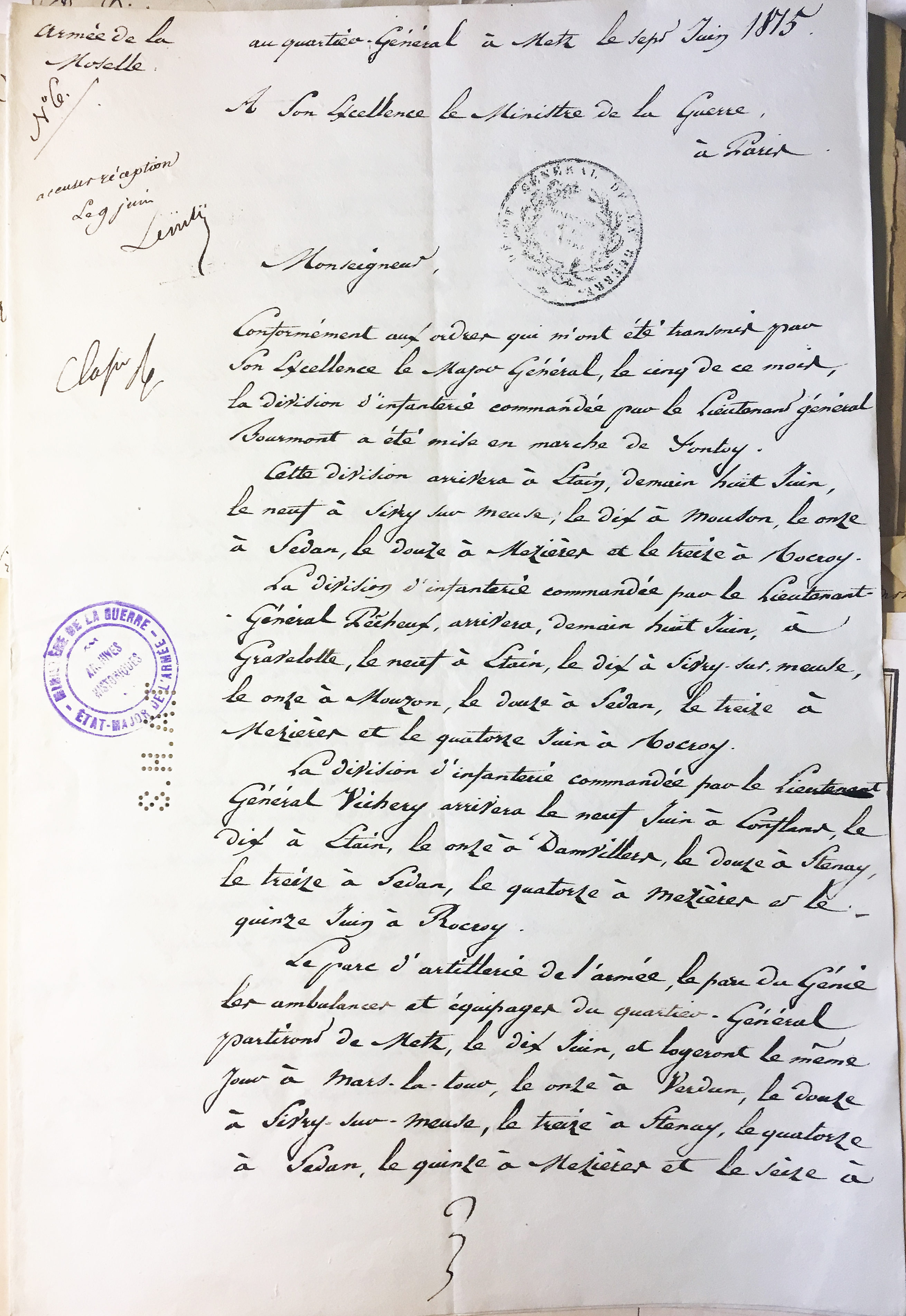 June 9 - The March of Gérard

At General Headquarters in Metz the 7th of June 1815
Armée de la Moselle
To His Excellency the Minister of War, in Paris
Monseigneur,
In accordance with the orders that were transmitted to me by His Excellency the Major General, the fifth of this month, the infantry division commanded by Lieutenant General Bourmont has begun its march from Fontoy.
This division will arrive in Etain, tomorrow June 8, the ninth in Sivry sur Meuse; the tenth in Mouzon, the eleventh in Sedan, the twelfth in Mézières and the thirteenth in Rocroy.
The infantry division commanded by Lieutenant General Pêcheux will arrive tomorrow, June 8, in Gravelotte, the ninth in Etain, the tenth in Sivry-sur-Meuse, the eleventh in Mouzon, the twelfth in Sedan, the thirteenth in Mézières and the fourteenth June in Rocroy.
The infantry division commanded by Lieutenant General Vichery will arrive June 9 in Conflans, the tenth in Etain, the eleventh in Damvillers, the twelfth in Stenay, the thirteenth in Sedan, the fourteenth in Mézières and June fifteenth in Rocroy.
The army’s artillery park, the engineering park, the ambulances and equipages of the General headquarters will leave Metz, June 10, and will lodge the same day in Mars-la-Tour, the eleventh in Verdun, the twelfth in Sivry-sur-Meuse, the thirteenth in Stenay, the fourteenth in Sedan, the fifteenth in Mézières and the sixteenth in Rocroy.
The Sixth Cavalry division commanded by Lieutenant General Maurin will arrive June eleventh in Etain, the twelfth in Damvillers, the thirteenth in Stenay, the fourteenth in Sedan, the fifteenth in Mézières and June sixteenth in Rocroy.
The General headquarters will arrive in Conflans on June 8, the ninth in Etain, the tenth in Damvillers, the eleventh in Stenay, the twelfth in Sedan, the thirteenth in Mézières and June fourteenth in Rocroy.
I have calculated this march following the knowledge I have of the countryside: the Cavalry division will cover the park and I have given the order to Lieutenant General Maurin to make camp on June thirteenth, fourteenth and fifteenth, in the towns to the right of the areas indicated on the above determined itinerary.
I will remain personally on the line of the Moselle, until June tenth included, to have the second reserve division commanded by Lieutenant General Rouyer placed and to give instructions to this General officer.
I will leave Metz on June eleventh and, the twelfth, I will be in Rocroy.
Each division will bring with it its artillery, ambulances, etc. as well as the military transports.
The troop will be supplied with an advance of four days of bread and a half pound of rice per man. Provision will further be brought in the caissons and each division will be preceded by the Commissary officer to prepare the foodstuffs along the road.
The divisions will march in the greatest order, the Generals, commanders and officers will march at the head of their troops while leaving no man behind.
The most exact discipline will be observed.
I have ordered the strictest surveillance of the border in order to prevent any sort of communication so that the movement be known to the enemy as late as possible.
I pray Your Excellency to accept homage of my respect.

Did Gérard send a similar message to Soult?  Probably, but to where?  As we only have a draft of what Soult sent to Gérard, we are not sure exactly what was said.  Further, we do not know if Soult indicated where he would be, even if it was in the form of a return address.

Soult has received much criticism for his performance during 1815 – much justified.  It is said his orders were unclear at times.  However, this seems very clear, from the June 5th draft: “The Emperor has ordered me to inform you that his plan is that you begin the Armée de la Moselle’s march, upon receipt of this order, that is to say, 7 June, and that you direct it following the itinerary, attached, to Rocroy where it must be on the thirteenth of this month without fail.”

In the absence of the original, the only conclusion that can be drawn is that Gérard misinterpreted his orders and was not executing the 4th Corps’ march with the required urgency.  If so, then this is an example of the typical friction of military operations during the Age of Pen.