The Orders of June 7 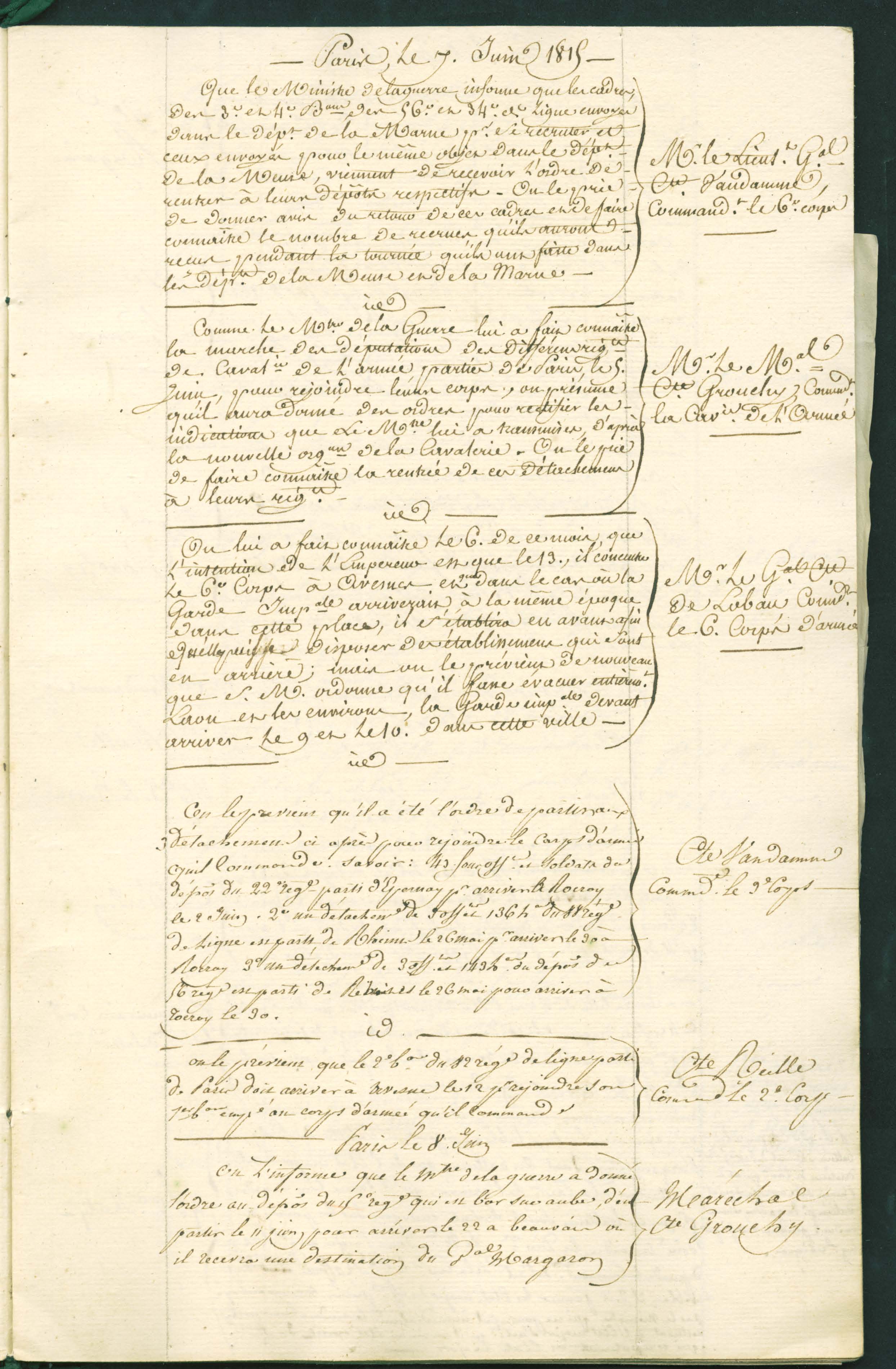 On June 7, Napoleon continued his orders to the Guard, writing to Drouot, an excerpt as follows:

The two Guard Regiments will have to leave tomorrow at daybreak, so as to arrive early on the 10th at Soissons. If they can go to Soissons in two days, so be it; they would be there on the 9th; otherwise they have to march in order to be there on the 10th, if they receive the order, between Soissons and Laon. All of the Guard must arrive by the evening of the 9th in Soissons, except for the two regiments which leave tomorrow. Tomorrow morning bring me a small table that will inform me about the day of departure of each column and its arrival at Soissons, and suggest departures, on the morning of the 9th, all that would be staying in Soissons, towards Laon, and in the morning of the 10th all that would have arrived on the 9th; so that on the evening of the 10th all of my Guard will be between Laon and Avesnes, except the two regiments that leave tomorrow, who will have passed Soissons.

Soult wrote to Lobau to coordinate the Guard’s movements with 6th Corps as both formations would be utilizing the same major road:

It was made known on the 6th of this month, that the intention of the Emperor is that on the 13th, he concentrates the 6th Corps at Avesnes, and that in case the Imperial Guard arrives at the same time in this place, it will establish itself forward so that the Guard can dispose of establishments which are behind; but it is again warned that His Majesty orders that he should evacuate entirely Laon and the environs, the Imperial Guard will arrive in this city between the 9th and 10th.

Soult wrote to other Corps commanders as well on a variety of topics as can be seen in the registry page. (Collection François Gianadda, Martigny)

But the most important order that was given this day, and possibly of the entire campaign, was Napoleon’s order to Soult:

I believe that it will be suitable for you to leave tomorrow evening. You will go directly to Lille and as incognito as possible, in order to make all of the arrangements so that the places on the front line are secure, and you will give the order to depart to the line troops in Calais. You may have the transfers made that the circumstances require, either in men, or in arms, and you will see a destination given to the battalions that are to arrive between now and the 13th. It will be expedient for you to inform the war office of all the departures of the battalions of le Nord. Make especially sure of their clothing and arms. That will occupy you until the 10th. See if there is a sufficient number of commanding generals and if there is a good commander of the citadel. Finally, advise General Lapoype of all that is necessary.  On the 11th you may go to Maubeuge and to Avesnes.
You will come to meet me on the road to Laon where it is probable that I will be on the 12th. You will obtain the latest information on the enemy’s position; you will endeavor to establish a spy office in Lille, and a company of men who know the roads of Belgium well. There are forestry guards from the Ardennes who communicate by way of the forests as far as Brussels. Procure an  intelligence officer for yourself who will procure men for us who can serve us.

What were Napoleon’s instructions?

Avesnes to Laon was a 6 – 8 hour journey. Considering the day dawned before 4 am, had Soult left for Laon the morning of the 12th, he could have arrived prior to noon.

Is that what Napoleon expected?  Or even earlier?

Why would Napoleon send away the major-général of the Armée du Nord at this time?   There were significant problems in Lille.  La Poype was not in sufficient control… or not trying hard enough… of a region with certain hostile sentiments.  Already, Allix, one of d’Erlon’s subordinates, had been sent.  Napoleon could not advance without firm confidence of the security of his flanks.  For this reason, he may have wished for the presence of a Marshal.  Despite the request to travel “incognito”, Napoleon may have also wished for this dash along the frontier to create noise for Allied intelligence.

The ripple of chaos had begun.