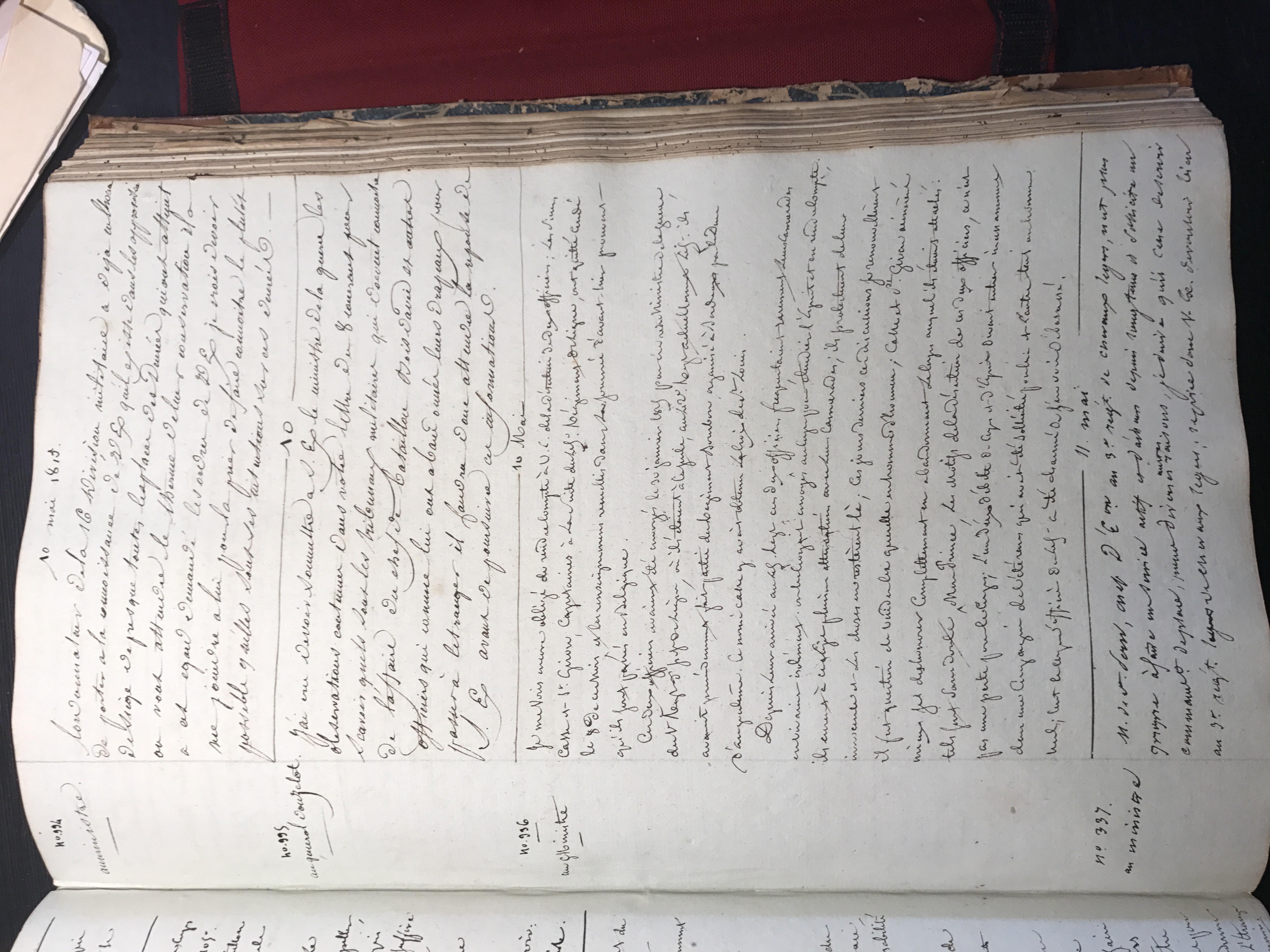 D’Erlon was referencing recent desertions, with Boisdavid named here.  The guidance d’Erlon sought from Davout is found in a detailed letter, #333, reproduced in Volume 1 of the reference.

Napoleon faced all of Europe in 1815, but his greatest threat were Frenchmen.  The Royalists were found in all corners of the Army and Government.  While desertion from the ranks is a problem that plagued all armies, Napoleon had to deal with constant intrigue and turmoil from officers.  Ultimately, they would be his undoing.

To bring the fall of Bonaparte, the court of Ghent bought the help of two officers in Paris in the bureaux of war, the first, that of Tabarié acknowledged by Wellington in his correspondence; the second, that of the Adjudant-Commander Count Boulogne de Lascours attaché to the cabinet of Prince d’ Eckmühl, admission of a royalist report intercepted by our gendarmerie and sent directly to the minister. In both cases, the sentiment was only a pretext, money was the motive. The emissary giving the name of Lascours declared that money was needed, much money, that at this price we would have everything from the cabinet.

The son of Chancelier Dambray, Captain of the 1st Lancers, deserted on about May 15. The chief of staff Colonel Arnaud de Saint-Sauveur fled his division, Davout ordered his arrest on June 5. On the 3rd, he wrote to Lecourbe: “We must keep away from our ranks all that are suspect”, the enemy seeks the traitors. At Montmédy, the sub-prefect prevented the execution of the military orders on the square. At Belfort, they tried to corrupt Lecourbe like Barbanégre at Huningue. How surprised when the Duke de Bellune wrote to the Duke de Berry on May 1, that it was necessary to fire the canon and that a general sent word, on the 8th, to Wellington.*

Of these infamies and these sorrows, there is a conclusion to draw. It is not us; it emanates from a famous staff general in the war, becoming Marshal of France after 1830, Count Lobau. When he found that the calls for desertion multiplied within the imperial troops stationed on the frontier, he responded to their insulting offers (80 francs for a cavalier and 20 for any foot soldier which would join Camp d’Alost) by this quote:

“Here is the price that these wretches place on a winner of Austerlitz and Moscow!”

* Le Monitor of May 12 delivered to the public the names of the officers passing to the enemy: Battalion Chief Boisdavid of the 17th line, Adjudant-Major Doisonville of the 7th Hussars. At a later date Captain Naylies, Andre, Second Lieutenant of Buisseret. La Gazette de France printed the names of the latter.

And what became of Boisdavid?

In 1816 we find him Lieutenant Colonel of the 2e Régiment d’infanterie de la garde-royale.  Betraying Napoleon paid many quite handsomely.

Often, I have spoken of the massive conspiracy against Napoleon in 1815, and some have argued that this would not be possible – that a conspiracy so large would not remain secret, and such conspiracy theories should be dismissed.  The problem with this point of view is that this is not a theory, and it is not a secret. It was well documented, it was well known, and it was incredibly successful.

Everyone in 1815 knew Napoleon and France were betrayed – but one risked death during the 2nd Restoration to speak in Napoleon’s defense.  During the July Monarchy, Napoleon’s veterans were once again welcomed into roles of power, and the traitors of 1815 could be treated quite harshly.  Bourmont’s family was stoned in the streets.

While the fall of the Bourbons allowed the normalization of the memory of the 1st Empire, the history of 1815 was dominated by who to blame for the defeat, and little attention was given to the political realities that all knew to be fact.  Further, due to the polarization of the country, there were frequent episodes of strife between the Royalists, Republicans, and Bonapartists.  One can get a sense of this feeling from the following passage from General Auguste Petiet:

General Foy wanted to review the notes that I agreed to trace each day during the campaign of 1815, to etch in my memory the important facts that I witnessed or which I had been able to report with accuracy to the Emperor’s headquarters. General Foy ensured me, when returning them to me, that the summary description of the campaign operations was reported perfectly according to his recollection, then he added: “You are young, General, let these notes lie dormant for twenty more years. In twenty years, it will be history; in twenty years partisan hatred will have faded; in twenty years we will raise alters to an exceptional man, today unrecognized, for whom evil persists. Finally, in twenty years France will go, if she must, to arms, to wrest from England the mortal remains of the martyr of Sainte-Hélène, with acclamations of all of Europe!”

In the mid-19th Century, coinciding with the rise of Napoleon III, republicans would write about the 1st Empire and the Campaign and created very useful histories… but often editorially slanted against Napoleon.  Bonapartism was an obstacle to a Republic, and thus tarnishing the memory of Napoleon was part of their agenda.  Charras all but erased the role of traitors from his history, and inaccurately reported the materials related to Bourmont.  This was made all the more credible as the history of the campaign is generally excellent.   In the 20th Century, English speaking authors would lean on these 19th century histories heavily, with the white washing of the role of the Royalists became nearly complete.  Only a few harmless anecdotes remained.

One of the great values of the Operations of the Armée du Nord : 1815 is that the forgotten conspiracy is illuminated once again.   The Timeline will focus on key acts that directly impacted operations, but there are many letters in the correspondence similar to the above d’Erlon missives.  If we had registries for more senior officers, one suspects we would find many more names.

While the Traitors played a major role in key events of the campaign, their presence created a general chill of mistrust.  The walls literally had ears, and we can be certain that it had a negative impact on behavior.  Staffs, which required more wealth, fancy uniforms, and possibly multiple horses, were particularly susceptible to containing those with Royalist sympathies.  While the soldiers fought for their right to self-determination, and fought tenaciously, officers may thrive under with Napoleon or the King.  If one lacked a strong philosophical objection to the Bourbons, then risking one’s life for no personal advantage was clearly not acceptable for many.

The role of the traitors must be understood to understand the events of 1815.  The history is not accurate without exploring their role.  However, this is not an excuse for Napoleon’s defeat.  He was absolutely aware of their presence, and most likely took advantage of it.  Wellington’s dispatches are full of false reports.  Napoleon knew that the initial military action would shake many traitors from the army, which it did, and he had plans for those in government had he been successful in Belgium.  He claimed Fouché would find his end against a wall, and there is every reason to believe this.  Yet, Napoleon would clearly underestimate the traitors when he made his first big mistakes, days before the French crossed the Sambre.