Registry entry #305 in Soult’s Mouvement des Troupes is unusual in that it is a detailed draft of an order to Gérard.  Likewise, the draft found in Service Historique de la Défense, Armée de la Moselle et al, avril – juin 1815, GR 15 C 11, the featured image of this post, is a complete draft rich in detail including naming the staff officer who carried the message, Jérôme Ramorino.

1 Registered
Avesnes, June 12, 1815
To Lieutenant Comte Gérard, Commander of the Armée de la Moselle.
I have received your letters of the 7th and 9th of this month, I see with trouble that the Armée de la Moselle, which you command, will not be gathered in Rocroy in its entirety until the 15th. The Emperor was counting, however, on it having arrived on the 13th without fail and on you having adjusted its march accordingly. The delay is all the more egregious since the whole army must be at the Sambre on the 14th and since the Emperor will probably have the enemies attacked the same day; you must, therefore, upon receipt of my letter, hasten the march of your columns so that they gain at least one day, and instead of establishing yourself in the vicinity of Rocroy as you declare you have the intention of doing, you will continue your march to Chimay and Beaumont where you will join the 3rd army Corps commanded by Lieutenant General Vandamme, and you will take position slightly behind him. If, upon your arrival in Beaumont, General Vandamme has moved forward you will follow his movement such that you join him as soon as possible and you form his second line as it is stated here above while waiting for new orders that you will receive. You will take care, General, to inform me immediately of all arrangements that you make in carrying out the present order and to inform me in detail of the march of your troops and of their position.
I advise you that I am giving the order to General Delort, Commander of the 14th Cavalry Division who is arriving on the 13th in Mézières, to go also to Beaumont to join the 4th Cavalry Corps. I am ordering him to hurry his march in order to arrive on the 15th in Beaumont.

What is first noticed is that this draft is labeled #1. As we will see, this was the 1 item in a related set, all dealing with executing Napoleon’s orders as received from Paris.

Additionally, Soult has received a letter Gérard wrote on June 9.  We have not seen this letter.  We saw a letter written on June 7 that Davout received on June 9 that outlined Gérard’s march, and we saw a letter Gérard wrote on June 10, sent to Laon, that indicated Gérard was accelerating his march.  Apparently, Gérard sent Soult an update on June 9 prior to accelerating his march, or Davout forwarded that response and this is what Soult is referring to.  As Gérard addressed the June 10 letter to Laon, it is doubtful he addressed a June 9 letter to Avesnes.  Thus, correspondence to Soult was finding its way to Avesnes – but note, there was clearly a delay.  It appears that Gérard’s letter arrived in Soult’s hands, from Laon, along with Napoleon’s orders.  When Soult did not arrive in Laon in the morning of June 12, some courier must have struck north looking for him.

Soult orders Gérard to accelerate, and he continues the theme of Gérard backing Vandamme, but Gérard’s destination is changed to fall in line with the Mons plan.  As we saw, the formal letter of the Mons plan did not even include Gérard, though it did say it had an Ordre du Jour for Position of the Army on the 13th.  At the same time, this letter delineated the army’s position for June 12, one if its obvious inconsistencies considering it was only written on June 10.  There was no realistic chance this order could be executed for June 12.

Either there is a missing document, and Soult was executing what it said, or Soult was improvising Gérard’s position based on the best information he had.  We remember that in the June 4 report to Napoleon, Soult had previously grouped Vandamme and Gérard as the second column that would fall on the Sambre.

Finally, Soult highlights that the attack is expected to commence on June 14.

As Gérard represented both an urgent acceleration as well as a significant deviation to existing orders, it is no surprise that his letter would be the first sent.  The detail of the registry and drafts is a measure of the addition detail given to what was arguably a crisis.  Soult was apparently unaware the Gérard had already accelerated his march – but the June 10 letter, address to Laon, had not yet found Soult. 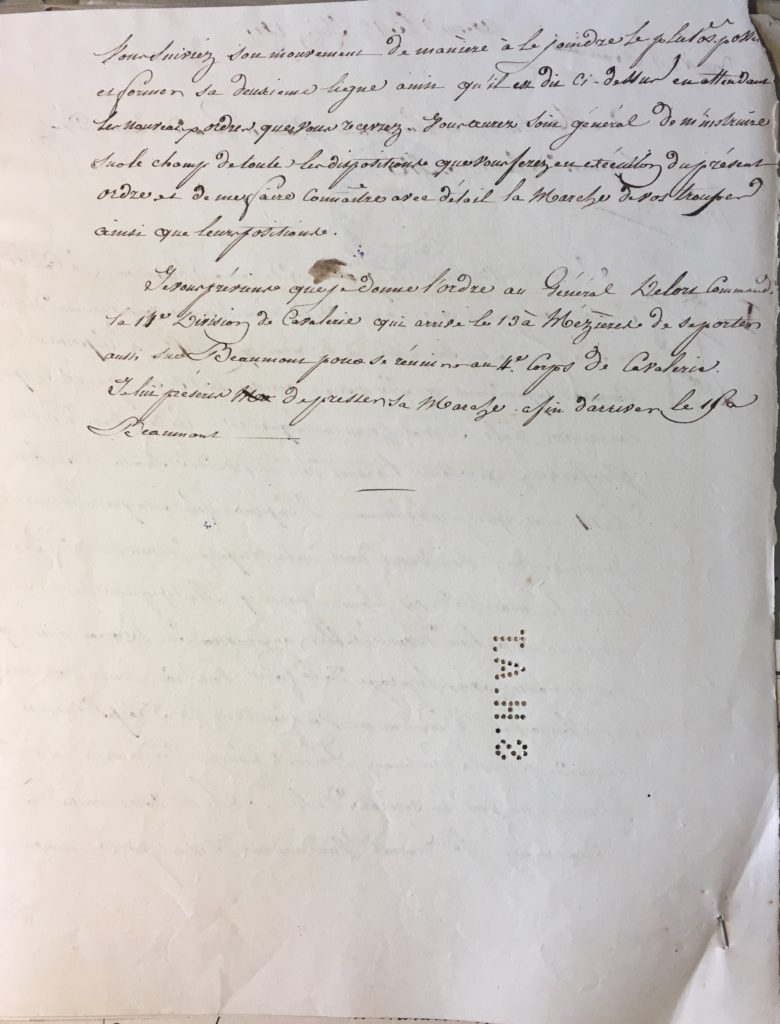