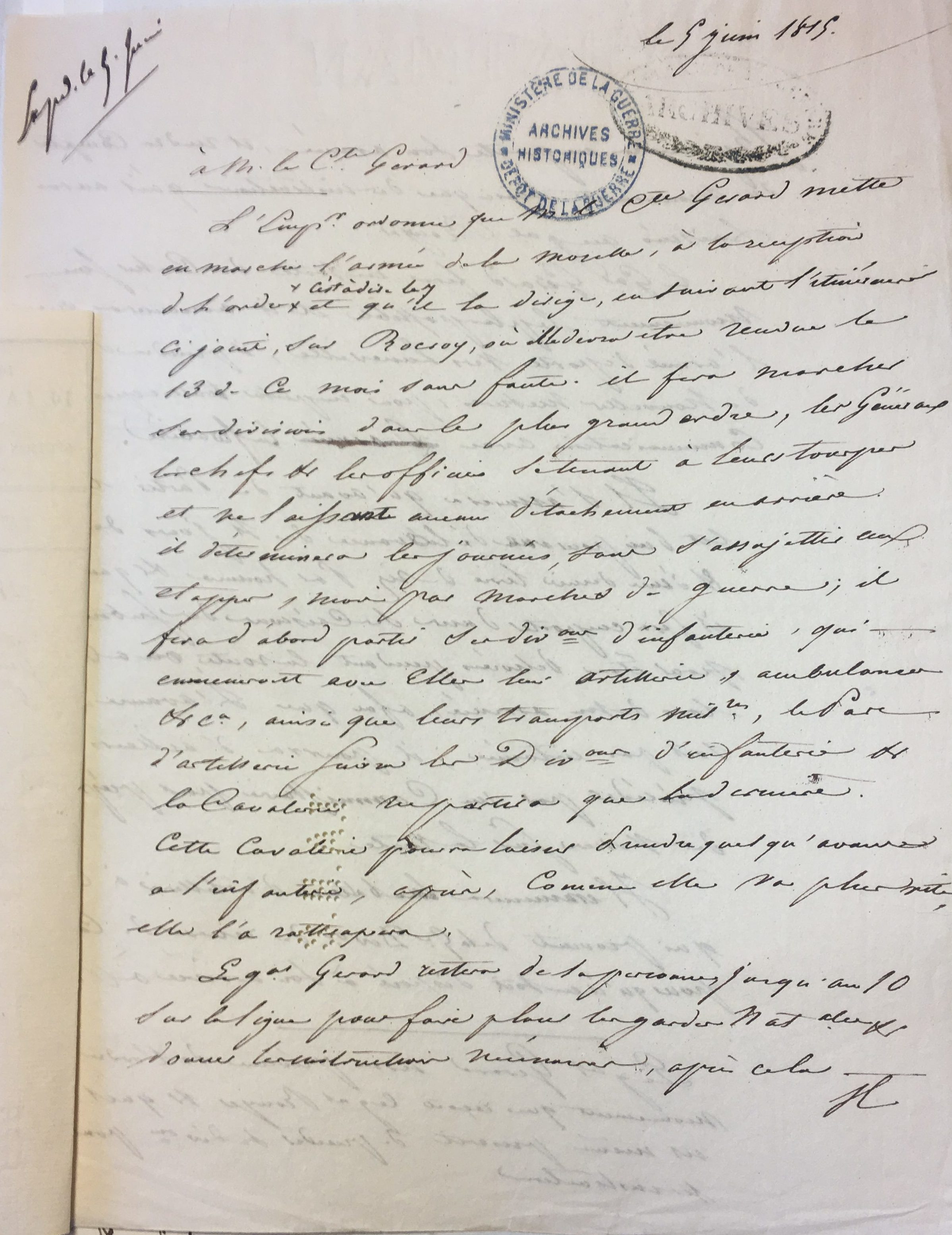 When did the Waterloo Campaign begin?  There is no definitive moment – but it was clearly not June 15.  The most important events of the campaign had already occurred by June 15.

The organizing of the Army that commenced immediately upon Napoleon’s return was ongoing through the moment Napoleon abdicated.  On June 3, the Guard had received orders to begin its movements of key elements out of Paris.  For this study, June 5 is chosen as there are definitive orders to the frontier where Napoleon would strike.

On this day, Soult sent orders to Gérard as noted in his registry, Mouvements des Troupes, #235, though the destination was now Rocroi.

Order to begin the Armée de la Moselle’s march upon receipt of the present; that is on seven June and to direct it following the itinerary established for it to Rocroy where it must be on the thirteenth of this month without fail.

The above is very terse, possibly because the original order was so long.  For this particular letter, we also have a draft of what was sent to Gérard.

The Emperor has ordered me to inform you that his plan is that you begin the Armée de la Moselle’s march, upon receipt of this order, that is to say, 7 June, and that you direct it following the itinerary, attached, to Rocroy where it must be on the thirteenth of this month without fail.

You will have your divisions march with the greatest of order, Generals, sergeants and officers at the head of their troops and leaving no man behind. You will decide on the days, without subjecting yourself to the stages, but by war marches. You will first have your infantry divisions leave which will take with transports; your artillery park will follow the infantry divisions and the Cavalry will leave only last. This Cavalry can even allow the infantry some lead and after, as it goes more quickly, it will catch up.

You will remain, in person, until the tenth on the line in order to place the National Guards of the 2nd Division of reserves commanded by General Rouyer, to whom I am giving the order to leave Nancy, upon receipt of my letter, that is to say, the seventh, to go without pause between Metz and Thionville. I am stipulating to General Rouyer that he precede his division and go immediately to you, in order to receive your instructions on the service for which his division will be responsible, and to take all of the service details upon his arrival.

The Emperor’s plan is that General Rouyer’s division relieve the army that you command on the line of the Moselle, and that it supply the posts necessary for the principal outlets; you will give instructions accordingly to this General and you will alert him as to the establishment of all of the posts of National Guard, Customs officers, forestry guards and Corps francs of partisans who are already established on the line and who must remain there under his orders.

You will ensure to hide your movements as much as possible, and you will announce that the army is headed toward Luneville; you will furthermore take new measures to stop any sort of communication with the border.

You will take care to ensure that before leaving, the troop is well provided for with an advance of four days of bread and a half pound of rice per man and that independently the caissons are brought with subsistence to be delivered during the route, or at Rocroy upon your arrival, in order that the advance not be undermined; it will furthermore be necessary that you have your divisions preceded by a War Commissary officer in order to have the previsions prepared along the way.

You will take the mounted artillery battery that is coming from the 5th Division of Cavalry Reserves, in order that it be ready on your arrival at Rocroy.

If the Cavalry movement that was stipulated to you in the order of the 3rd of this month has not already been executed, you will hurry it, such that no regiment remains behind.

Report to me all the arrangements that you will make for the execution of this movement and make me aware of your troops’ march, day by day, in order that I can report it to the Emperor.

Soult forwarded the orders to Gérard to Davout.  In this letter, he included the itinerary he proposed:

Gérard’s location had been changed from Philippeville to Rocroy.  This is consistent with Soult’s report of June 4 in that each corps was first staged about one or two days march from their ultimate destination.  Consistent across many letters, reaching a destination meant by dawn of that, not by the end of the day.  When there were exceptions, they would be identified, such as by noon of a given day.

By arriving in Rocroy by June 13, a full days march was still available to move to Philippeville for an advance on June 14, or for whatever adjustment Napoleon might wish. But, it should be noted that this itinerary did not match Napoleon’s initial request to arrive in Philippeville no later than June 13.  It is very possible we do not have the full record of Napoleon and Soult’s communications.

Clearly, Napoleon had chosen a campaign in Belgium, but where he would cross the frontier was still unclear. 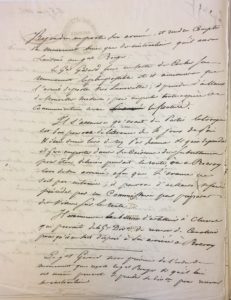