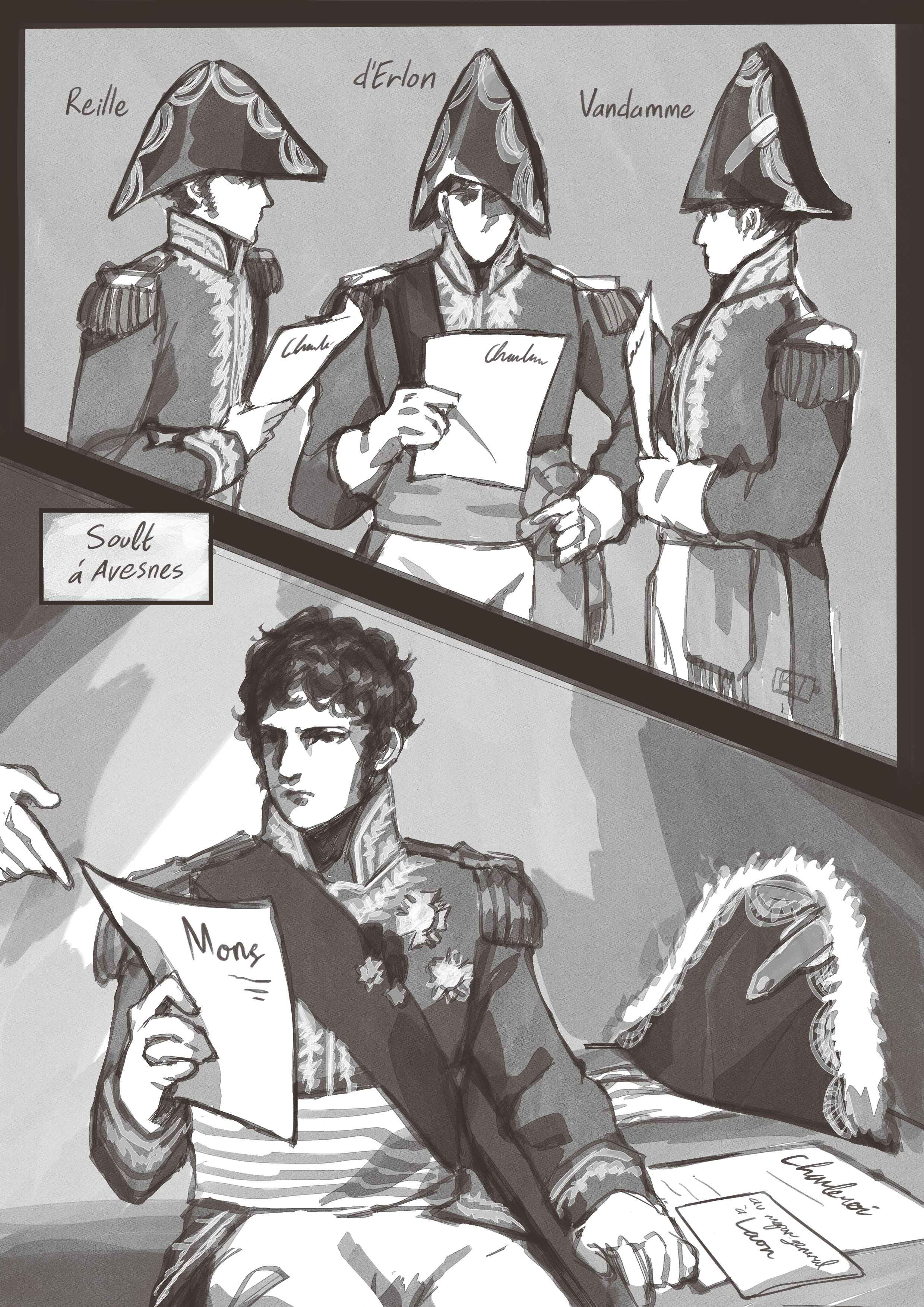 When Napoleon arrived in Avesnes, he must have received very positive intelligence – the Allies had not moved. His intentions hadn’t been discovered. Thus, he delayed the campaign a day to account for the chaos introduced by the contradictory orders, Soult not being present in Laon, or both.

Had Soult been in Laon, the events which caused Soult to execute the Position of the 12th Mons plan over the Positions of the 13th Charleroi plan could have been circumvented. Soult would have received orders 12 – 18 hours earlier and met with Napoleon about 15 hours earlier. The orders from Paris to Soult were delayed considerably longer than the journey from Laon to Avesnes. This must be have been a consequence of the confusion of Soult’s absence. Soult could have met with Napoleon around noon on June 12, but instead didn’t meet with Napoleon until the early morning of June 13. Soult clearly received both sets of orders, but chose the Mons plan.

On June 10, did Napoleon first author the Mons plan, and then change his mind?  In this scenario, the riders carrying the orders to Soult in Laon arrived there, but did not find the major-général.  In the confusion, Soult might have received the letters in the wrong order.  This, or for some other reason, Soult believed the Mons plan was the final plan of advance.

Another scenario exists which has often been hinted at, but never full explained.  The Allies received numerous reports of an attack on Mons, including a feint on Charleroi.  Philippe de Calltaÿ wrote:

This was all part of the Emperor’s deception plan, aimed at leading the Allies astray. Recognising that leaks would occur from the war ministry and from the army staff, he let word spread of a false attack on Charleroi the better to disguise his intention to attack Charleroi.

This explanation would explain the flaws of the June 10 Bertrand letter.

In his discussion with Hobhouse after Napoleon’s death, Bertrand mentioned that an agent of Fouché was apprehended on June 10.  This event may have triggered the idea of distributing false information.  Earlier in 1815, Napoleon had substituted his own man to meet a foreign agent when correspondence was intercepted.

A biography of Fouché, though believed to have been written by someone else, made the following claim:

My agents with Metternich and Lord Wellington had promised marvels and mountains; the English general expected that I should at the very least give him the plan of the campaign. I knew for certain that the unforeseen attack would take place on the 16th or 18th at latest. Napoleon intended to give battle on the 17th to the English army, after having marched right  over the Prussians on the preceding day. He had the more reason to trust the success of that plan, that Wellington, deceived by false reports, believed the opening of the campaign might  be deferred till the beginning of July. The success of Napoleon, therefore, depended on a surprise; and I arranged my plans in conformity. On the very day of the departure of Napoleon I dispatched Madame D—–, furnished with notes written in cipher, containing the whole plan of the campaign. But at the same time I privately dispatched orders for such obstacles at the frontier, where she was to pass, that she could not arrive at the head-quarters of Wellington till after the event.

Sir Walter Scott, who visited Paris after Waterloo, substantiated the above account:

But I have understood from good authority, that a person, bearing, for Lord Wellington’s information, detailed plan for the campaign, was actually dispatched from Paris in time to have reached Brussels before the commencement of hostilities. This communication was entrusted to a female, who was furnished with a pass from Fouché himself, and who traveled with all dispatch in order to accomplish her mission ; but being stopped for two days on the frontiers of France, did not arrive until after the battle of the 16th. This fact, for such I believe it to be, seems to countenance the opinion that Fouché maintained a correspondence with the allies, and may lead, on the other hand, to suspicion, that though he despatched the intelligence in question, he contrived to manage, that its arrival should be too late for the purpose which it was calculated to serve.

If Bertrand and Napoleon took advantage of Fouché’s attempt to play both sides, they could have been victimized by Fouché’s arrangements to prevent the delivery of the orders.  Soult may have never been intended to see the Mons plan.

Napoleon’s vision was severely damaged.  We have previously pointed out the existence of traitors throughout the army and government.  Now the reason becomes clear.  As Callataÿ said, Napoleon knew of their existence.  But, on the morning of June 12, he could have stood in the middle of Paris and announced is plan to all who would listen, and it wouldn’t matter.  By June 14, the French army would be crossing the Sambre.  Napoleon could out race any intelligence of his departure from Paris.  His Army would be moved into position and advance in a final continuous movement.  No actionable intelligence of the attack could reach the Allied command in time.

If the Mons plan was a ruse, Napoleon could hope that it would reach Wellington about the same time as the news of the advance, or shortly after.  Napoleon would hope that Wellington, seeing a disposition for the 12th, would fear the French had achieved a mature advance on Mons, and keep the Anglo-Dutch army to the west long enough for Napoleon to seize the Nivelles-Namur road, and complete the separation of the Allied command, preventing their cooperation.  Napoleon may have felt this extra effort was necessary if he expected that there was no way he could prevent the intelligence of his presence on the border and the army’s advance could be kept from the Allied command.

We now know, over 100 years since Lettow-Vorbeck first raised the issue, why Soult’s orders of June 12 did not match Napoleon’s intention of June 10.  The details remain a curiosity.  We also know that Napoleon never spoke of this mishap.  Bertrand never recorded the discussed details in his diaries.  Napoleon’s memoirs painted the concentration and attack as near perfection – catching the Allies in the cantonments.  Whatever the explanation for Soult’s remaining in Avesnes and his execution of the Mons plan, it is probable that Napoleon had a high degree of culpability, as he never held anyone accountable for this great error.  On the other hand, it may just have been more important that the story of his final campaign be told as a strategic masterpiece, and thus Bertrand, Soult, and Napoleon were sure that no one ever heard of this episode.  Bear in mind – the Generals only knew what they received, and quickly scattered after the defeat.

But now, on June 13, Napoleon had a most unsavory choice.  Grouchy was force marching the cavalry to the frontier, and they arrived in bad shape.  Attacking into the gut of the enemy without the cavalry in optimal condition as the eyes and ears of the Army was a disaster in the making.  At the same time, a delay enabled the detection of his true intentions.

Napoleon had no choice but to delay, and allow the elements from Laon, and Gérard, to gather with the army.

The advance would now be June 15.

Orders for Position of the Army on the 14th were distributed.  Security was a premium, and Charleroi was identified:

The bivouacs will be placed so that the fires cannot be seen by the enemy; the Generals will prevent anyone from leaving the camp; they will assure that the troops are equipped with 50 cartridges per man, four days of bread and a half pound of meat; that the artillery and the ambulances are in good condition, and they will be placed in their order of battle. Thus the 2nd Corps will be arranged so that it can begin marching on the 15th, at 3:00 o’clock in the morning, if the order is given, to march on Charleroi and to arrive there before nine o’clock.

Charleroi was likewise identified for Gérard:

The Armée de la Moselle will take a position in front of Philippeville tomorrow. Count Gérard will arrange to be able to leave on the day after tomorrow, the 15th, at 3 o’clock in the morning, to join the 3rd Corps and to press its movement on Charleroi, according to the new order that will be given to him; but General Gérard must especially guard his right flank and reconnoiter all the roads running to Charleroi and Namur.