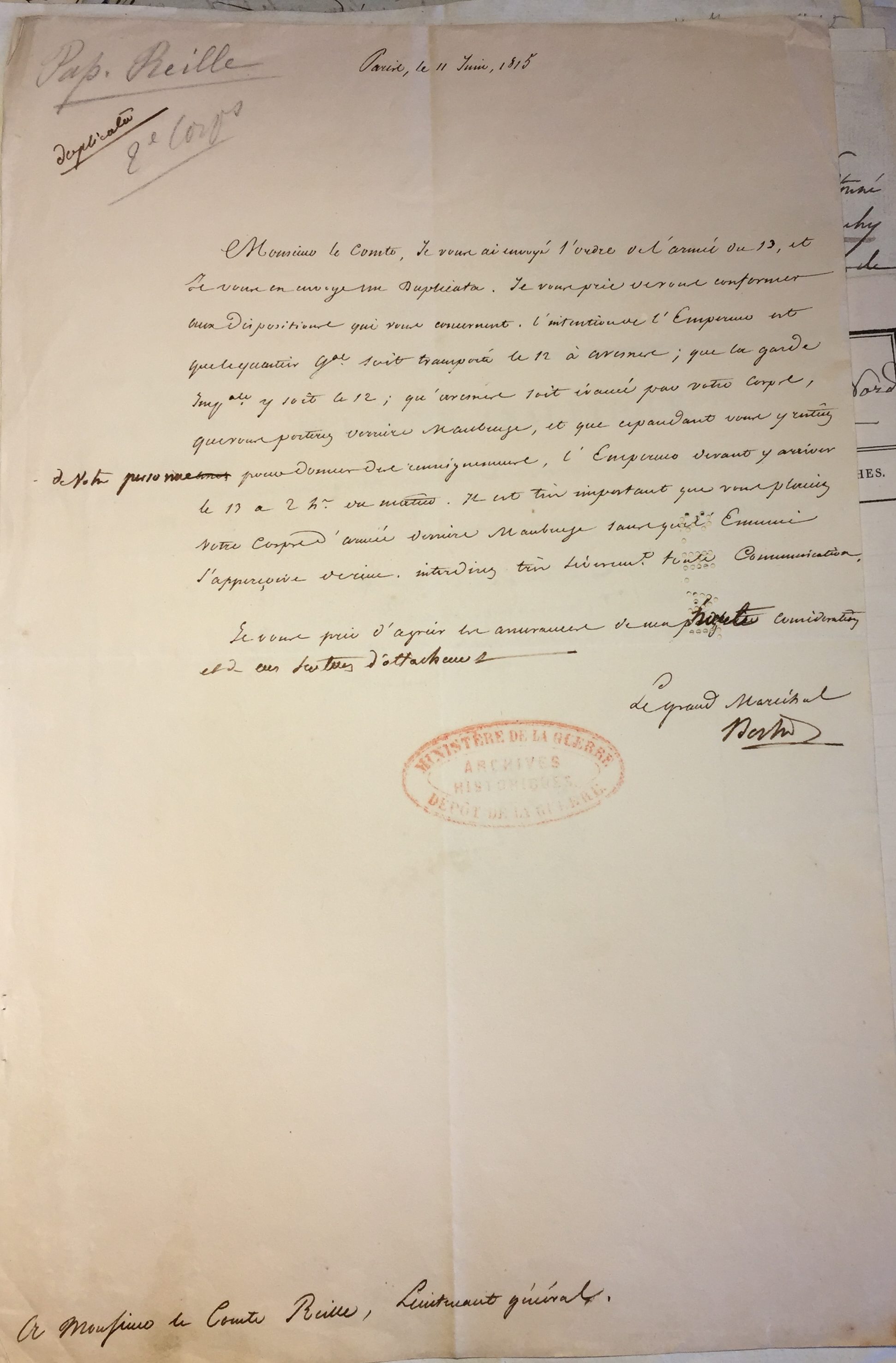 On June 11, Bertrand’s registry includes an entry for Reille:

I sent you the order for the army on the 13th. I am sending you a duplicate in case of any eventuality. I pray you to comply with to the provisions that concern you. The intention of the Emperor is that the General Headquarters be transported on the 12th to Avesnes, that the Imperial Guard be there on the 12th, that Avesnes be evacuated by your corps, that you [leave] in front of Maubeuge and that, however, you remain there in person in order to provide information. The Emperor should arrive on the 13th at 2 o’clock in the morning. It is very important that you position your army corps behind Maubeuge without the enemy perceiving anything. Very strictly forbid all communication.

This page features the image of the original letter:

Paris, June 11, 1815
Monsieur le Comte,
I sent you the order of the army of the 13th, and I am sending you a duplicate. Please comply with the provisions that concern you. The intention of the Emperor is that the Army Headquarter will be transferred on the 12th to Avesnes; that the imperial guard will be there on the 12th; that your corps must vacate Avesnes, which you will lead behind Maubeuge, and that you remain there in person to give information. The emperor will arrive there on the 13 at 2 o’clock in the morning. It is very important that you place your army corps behind Maubeuge without the enemy being aware of anything. Severely prohibit any communication. Please accept assurances of my highest consideration and
of my attachment.

A 2010 Auction listed the Ordre du Jour for Position of the Army sent by Bertrand on June 11:

ORDRE du jour made by the emperor 5 days before Waterloo, that gives the « Position of the army on the 13th », arranged in a curve going from Pont-sur-Sambre to Mariembourg, passing by Maubeuge, Beaumont and Philippeville. It insists on the necessity for secrecy, of intercepting communications and of not revealing his movements until as late as possible.

This is further confirmation that the Charleroi plan was the plan Napoleon expected to have executed.

Bertrand’s registry does not include any additional duplicate orders, but it does have the following:

I pray Comte Lavallette to send an extraordinary estafette to carry the two attached letters which are urgent.

Several of Gourgaud’s orderlies had been previously sent on missions across France.  Their reports were captured after Waterloo and can be found in Porefeuille de Buonaparte, pris a Charleroi le 18 juin 1815.

Napoleon and Bertrand ended the day preparing to travel to Laon.

The ADCs and orderlies dispatched on June 10 were in transit – but the one sent to Soult in Laon had probably arrived and was waiting for his arrival.

Soult sent a few letters from Valencienne, and then traveled to Avesnes, where he stopped.

Grouchy was in Laon, awaiting orders.

Napoleon had not even left Paris, and the first great mistake of the Campaign had already been made.