Commander in Chief of the 3rd Corps of the Armée du Nord.

The Emperor’s plan, General, is that you form your army corps in front of Philippeville in order to be ready to push ahead tomorrow towards Charleroi, if orders are sent to you on this subject.

The Armée de la Moselle will also direct itself to Philippeville & will follow your movement; I am sending orders to this effect to Lieutenant General Gérard.

According to the orders that I sent to you yesterday, you were to gather your Army Corps in Beaumont, but the Emperor has again ordered the execution of the ordre du jour from the 10th of which I sent you the ampliation, according to which you were to gather your troops during the day of the 13th in front of Philippeville. It is thus the dispositions of the order given by the Emperor on the 10th that you must follow.

If, however, once my letter has reached you, your troops should be found between Philippeville and Beaumont you will leave them there and you will position them so as to be able to debouch to Charleroi, in taking your line of operations to Philippeville.

Give orders to bake a lot of bread in Philippeville and for the authorizing officer to have many provisions brought.

Instruct me immediately of the location of your troops and of the arrangements that you will make for the execution of this order.

You will take care, General, to send an officer to General Gérard to inform him of these arrangements. 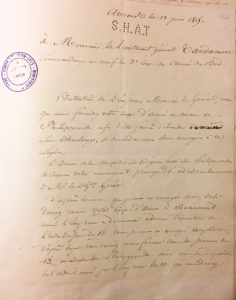 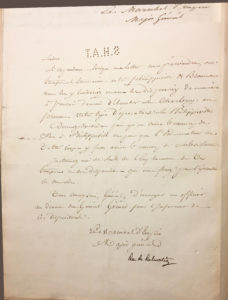